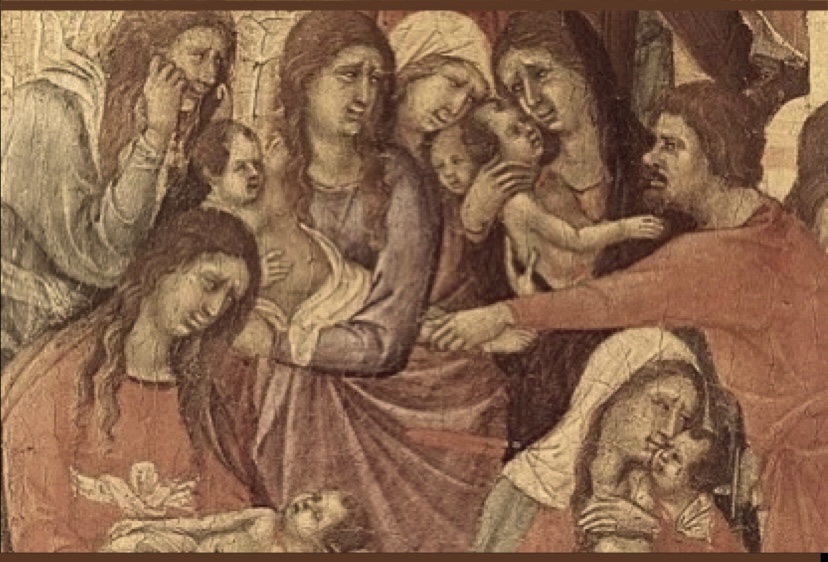 “Surely I was sinful at birth, sinful from the time my mother conceived me”

The Letter of Barnabas

“Thou shalt not slay the child by procuring abortion; nor, again, shalt thou destroy it after it is born” (Letter of Barnabas 19 [A.D. 74]).

The Apocalypse of Peter

“And near that place I saw another strait place . . . and there sat women. . . . And over against them many children who were born to them out of due time sat crying. And there came forth from them rays of fire and smote the women in the eyes. And these were the accursed who conceived and caused abortion” (The Apocalypse of Peter 25 [A.D. 137]).

“What man of sound mind, therefore, will affirm, while such is our character, that we are murderers? . . . [W]hen we say that those women who use drugs to bring on abortion commit murder, and will have to give an account to God for the abortion, on what principle should we commit murder? For it does not belong to the same person to regard the very fetus in the womb as a created being, and therefore an object of God’s care, and when it has passed into life, to kill it; and not to expose an infant, because those who expose them are chargeable with child-murder, and on the other hand, when it has been reared to destroy it” (A Plea for the Christians 35 [A.D. 177]).

“In our case, a murder being once for all forbidden, we may not destroy even the fetus in the womb, while as yet the human being derives blood from the other parts of the body for its sustenance. To hinder a birth is merely a speedier man-killing; nor does it matter whether you take away a life that is born, or destroy one that is coming to birth. That is a man which is going to be one; you have the fruit already in its seed” (Apology 9:8 [A.D. 197]).

“Among surgeons’ tools there is a certain instrument, which is formed with a nicely-adjusted flexible frame for opening the uterus first of all and keeping it open; it is further furnished with an annular blade, by means of which the limbs [of the child] within the womb are dissected with anxious but unfaltering care; its last appendage being a blunted or covered hook, wherewith the entire fetus is extracted by a violent delivery.

“There is also [another instrument in the shape of] a copper needle or spike, by which the actual death is managed in this furtive robbery of life: They give it, from its infanticide function, the name of embruosphaktes, [meaning] “the slayer of the infant,” which of course was alive. . . .

“[The doctors who performed abortions] all knew well enough that a living being had been conceived, and [they] pitied this most luckless infant state, which had first to be put to death, to escape being tortured alive” (The Soul 25 [A.D. 210]).

“Now we allow that life begins with conception because we contend that the soul also begins from conception; life taking its commencement at the same moment and place that the soul does” (ibid., 27).

“There are some [pagan] women who, by drinking medical preparations, extinguish the source of the future man in their very bowels and thus commit a parricide before they bring forth. And these things assuredly come down from the teaching of your [false] gods. . . . To us [Christians] it is not lawful either to see or hear of homicide” (Octavius 30 [A.D. 226]).

“Women who were reputed to be believers began to take drugs to render themselves sterile, and to bind themselves tightly so as to expel what was being conceived, since they would not, on account of relatives and excess wealth, want to have a child by a slave or by any insignificant person. See, then, into what great impiety that lawless one has proceeded, by teaching adultery and murder at the same time!” (Refutation of All Heresies [A.D. 228]).

“Concerning women who commit fornication, and destroy that which they have conceived, or who are employed in making drugs for abortion, a former decree excluded them until the hour of death, and to this some have assented. Nevertheless, being desirous to use somewhat greater lenity, we have ordained that they fulfill ten years [of penance], according to the prescribed degrees” (canon 21 [A.D. 314]).

“Let her that procures abortion undergo ten years’ penance, whether the embryo were perfectly formed, or not” (First Canonical Letter, canon 2 [A.D. 374]).

“[T]he man, or woman, is a murderer that gives a philtrum, if the man that takes it dies upon it; so are they who take medicines to procure abortion; and so are they who kill on the highway, and rapparees” (ibid., canon 8).

“Wherefore I beseech you, flee fornication. . . . Why sow where the ground makes it its care to destroy the fruit?—where there are many efforts at abortion?—where there is murder before the birth? For even the harlot you do not let continue a mere harlot, but make her a murderess also. You see how drunkenness leads to prostitution, prostitution to adultery, adultery to murder; or rather to a something even worse than murder. For I have no name to give it, since it does not take off the thing born, but prevents its being born. Why then do thou abuse the gift of God, and fight with his laws, and follow after what is a curse as if a blessing, and make the chamber of procreation a chamber for murder, and arm the woman that was given for childbearing unto slaughter?” (Homilies on Romans 24 [A.D. 391]).

“I cannot bring myself to speak of the many virgins who daily fall and are lost to the bosom of the Church, their mother. . . . Some go so far as to take potions, that they may ensure barrenness, and thus murder human beings almost before their conception. Some, when they find themselves with child through their sin, use drugs to procure abortion, and when, as often happens, they die with their offspring, they enter the lower world laden with the guilt not only of adultery against Christ but also of suicide and child murder” (Letters 22:13 [A.D. 396]).