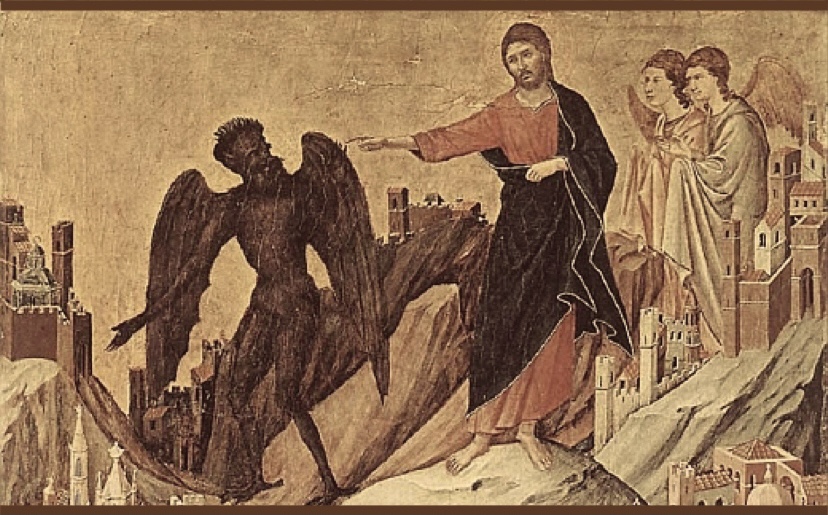 Fasting is a biblical discipline that can be defended from both the Old and the New Testament. Christ expected his disciples to fast (Mt 9:14-15) and issued instructions for how they should do so (Mt 6:16-18).  Jesus said “when you fast” not “if you fast.” He expected his followers to fast, so it is no surprise that we find them doing so in the book of Acts: “While they were worshiping the Lord and fasting, the Holy Spirit said, ‘Set apart for me Barnabas and Saul for the work to which I have called them.’ So after they had fasted and prayed, they placed their hands on them and sent them off” (Acts 13:2–3; cf. 14:23).

Christians are called to fast for many reasons, but first and foremost, because we are called to imitate Christ (1 Corinthians 11:1).  By doing so, we may recognize that if we unite our suffering with Christ’s own suffering, it can aid in Christ’s redemptive work within the Church (Colossians 1:24) and help us to grow in hope and endurance (Romans 5:3-5). We learn to deny ourselves pleasures, even in spite of pain, leading to spiritual growth.  By willingly embracing the hunger that fasting produces, we show that we are willing to shoulder the burdens of others (cf. Col. 1:24).  Most importantly, by forcing us to face our dependence upon God’s Providence, fasting teaches us humility; “Then I proclaimed a fast . . . that we might humble ourselves before our God, to seek from him a straight way for ourselves, our children, and all our goods” (Ezra 8:21).

Abstinence from certain foods is also a biblical discipline. In Daniel 10:2-3 we read, “In those days I, Daniel, was mourning for three weeks. I ate no delicacies, no meat or wine entered my mouth, nor did I anoint myself at all, for the full three weeks.”  Catholics use a practice similar to Daniel’s when, as a way of commemorating Christ’s Crucifixion on a Friday, they abstain from eating meat on that day of the week during Lent. The only kind of flesh they eat on Friday is fish, which is a symbol of Christ. Lent is the 40 days before Easter in which Catholics pray, fast, contemplate, and engage in acts of spiritual self-discipline.  The reason Lent lasts 40 days is that 40 is the traditional number of judgment and spiritual testing in the Bible (Gn 7:4, Ex 24:18, 34:28, Nm 13:25, 14:33, Jon 3:4). Lent bears particular relationship to the 40 days Christ spent fasting in the desert before entering into his public ministry (Mt 4:1-11). Catholics imitate Christ by spending 40 days in spiritual discipline before the celebration of Christ’s triumph over sin and death.

“And whenever you fast, do not look dismal, like the hypocrites, for they disfigure their faces so as to show others that they are fasting. Truly I tell you, they have received their reward. But when you fast, put oil on your head and wash your face, so that your fasting may be seen not by others but by your Father who is in secret; and your Father who sees in secret will reward you.”

“While they were worshiping the Lord and fasting, the Holy Spirit said, “Set apart for me Barnabas and Saul for the work to which I have called them.” Then after fasting and praying they laid their hands on them and sent them off.“

Draw near to God, and he will draw near to you. Cleanse your hands, you sinners, and purify your hearts, you double-minded.  Lament and mourn and weep. Let your laughter be turned into mourning and your joy into dejection.  Humble yourselves before the Lord, and he will exalt you.

“In those days I, Daniel, was mourning for three weeks. I ate no delicacies, no meat or wine entered my mouth, nor did I anoint myself at all, for the full three weeks.”

“Then I proclaimed a fast . . . that we might humble ourselves before our God, to seek from him a straight way for ourselves, our children, and all our goods.”

Then the disciples of John came to him, saying, “Why do we and the Pharisees fast often, but your disciples do not fast?”  And Jesus said to them, “The wedding guests cannot mourn as long as the bridegroom is with them, can they? The days will come when the bridegroom is taken away from them, and then they will fast.

“And after they had appointed elders for them in each church, with prayer and fasting they entrusted them to the Lord in whom they had come to belie

Before the baptism, let the one baptizing and the one to be baptized fast, as also any others who are able. Command the one who is to be baptized to fast beforehand for one or two days…[After becoming a Christian] do not let your fasts be with the hypocrites. They fast on Monday and Thursday, but you shall fast on Wednesday and Friday (Didache 7:1, 8:1 [A.D.70]).

You [Corinthians], therefore, who laid the foundation of the rebellion [in your church], submit to the presbyters and be chastened to repentance, bending your knees in a spirit of humility (Letter to the Corinthians 57 [A.D. 80]).

[The old woman told me:] “Every prayer should be accompanied with humility: fast, therefore, and you will obtain from the Lord what you beg.” I fasted therefore for one day (The Shepherd 1:3:10 [A.D. 80]).

For as many as are of God and of Jesus Christ are also with the bishop. And as many as shall, in the exercise of penance, return into the unity of the Church, these, too, shall belong to God, that they may live according to Jesus Christ (Letter to the Philadelphians 3 [A.D. 110]).

Wherefore, forsaking the vanity of many, and their false doctrines, let us return to the word which has been handed down to us from the beginning; staying awake in prayer, and persevering in fasting; beseeching in our supplications the all-seeing God “not to lead us into temptation,” as the Lord has said: “The spirit truly is willing, but the flesh is weak” [Matt. 26:41] (Letter to the Philippians 7 [A.D. 135]).

I will also relate the manner in which we dedicated ourselves to God when we had been made new through Christ; lest, if we omit this, we seem to be unfair in the explanation we are making. As many as are persuaded and believe that what we teach and say is true, and undertake to be able to live accordingly, are instructed to pray and to entreat God with fasting, for the remission of their sins that are past, we are praying and fasting with them. Then they are brought by us to where there is water, and are regenerated in the same manner in which we were ourselves regenerated. For, in the name of God, the Father and Lord of the universe, and of our Savior Jesus Christ, and of the Holy Spirit, they then receive the washing with water. For Christ also said, “Except ye be born again, ye shall not enter into the kingdom of heaven” (First Apology 61 [A.D. 151]).

Some consider themselves bound to fast one day [during Lent], others two days, others still more, while others [do so during] forty; the diurnal and the nocturnal hours they measure out together as their [fasting] day. And this variety among the observers [of the fasts] had not its origin in our time, but long before in that of our predecessors (Letter to Pope Victor [A.D. 190]).

Confession is a discipline for man’s prostration and humiliation…It commands one to lie in sackcloth and ashes, to cover the body with mourning, to cast the spirit down in sorrow, to exchange the sins which have been committed for a demeanor of sorrow; to take no food or drink except what is plain, not, of course, for the sake of the stomach, but for the sake of the soul; and most of all, to feed prayers on fasting; to groan, to weep and wail day and night to the Lord your God; to bow before the presbyters, to kneel before God’s refuge places [altars], and to beseech all the brethren for the embassy of their own supplication (Repentance 9:3-5 [A.D. 203]).

There is also a seventh, albeit hard and laborious [method of forgiveness] – the remission of sins through penance, when the sinner washes his pillow in tears, when his tears are day and night his nourishment, and when he does not shrink from declaring his sin to a priest of the Lord (Homilies on Leviticus 2:4 [A.D. 248]).

Sinners may do penance for a set time, and according to the rules of discipline come to public confession, and by imposition of the hand of the bishop and clergy receive the right of communion (Letters 9:2).

Weeping is done outside the gate of the oratory, and the sinner standing there ought to implore the faithful, as they enter, to pray for him. Hearing is in the narthex inside the gate, where the sinner ought to stand while the catechumens are there, and afterward he should depart. For let him hear the Scriptures and the teachings…and then be cast out and not be reckoned as worthy of [the penitential] prayer. Submission allows one to stand within the gate of the temple, but he must go out with the catechumens. Assembly allows one to be associated with the faithful, without the necessity of going out with the catechumens. Last of all is participation in the consecrated elements (Canonical Letter, canon 11 [A.D. 256]).

[The Emperor Philip,] being a Christian desired, on the day of the last paschal vigil, to share with the multitude in the prayers of the Church, but that he was not permitted to enter, by him who then presided, until he had made confession and had numbered himself among those who were reckoned as transgressors and who occupied the place of penance. For if he had not done this, he would never have been received by him, on account of the many crimes which he had committed. It is said that he obeyed readily, manifesting in his conduct a genuine and pious fear of God (Church History 6:34 [A.D. 312]).

COUNCIL OF NICAEA I

It is decided by the council, even though they [those who apostatized without coercion during the persecution of Licinius] are unworthy of mercy, to treat them, nevertheless, with kindness. Those, then, who are truly repentant shall, as already baptized [people], spend three years among the hearers, and seven years among the kneelers, and for two years they shall participate with the people in prayers, but without taking part in the offering (canon 11 [A.D. 325]).

If the serpent, the devil, bites someone secretly, he infects that person with the venom of sin. And if the one who has been bitten keeps silence and does not do penance, and does not want to confess his wound…then his brother and his master, who have the word [of absolution] that will cure him, cannot very well assist him (Commentary on Ecclesiastes 10:11 [A.D. 388]).

Let him who has [committed incest]…[a]fter coming to an awareness of that dread sin, let him be a weeper for three years, standing at the door of the houses of prayer and begging the people entering there for the purpose of praying to offer in sympathy for him, each one, earnest petitions to the Lord. After this, let him be admitted for another three years among the hearers only; and when he has heard the Scriptures and the teachings, let him be put out and not be deemed worthy of the prayer. Then, if he has sought it with tears and has cast himself down before the Lord with a contrite heart and with great humility, let him be given admission for another three years. And thus, when he has exhibited fruits worthy of repentance, let him be admitted in the tenth year to the prayer of the faithful without communion. And when he has assembled for two years in prayer with the faithful, then let him finally be deemed worthy of the communion of the good (Letters217:75 [A.D. 367]).