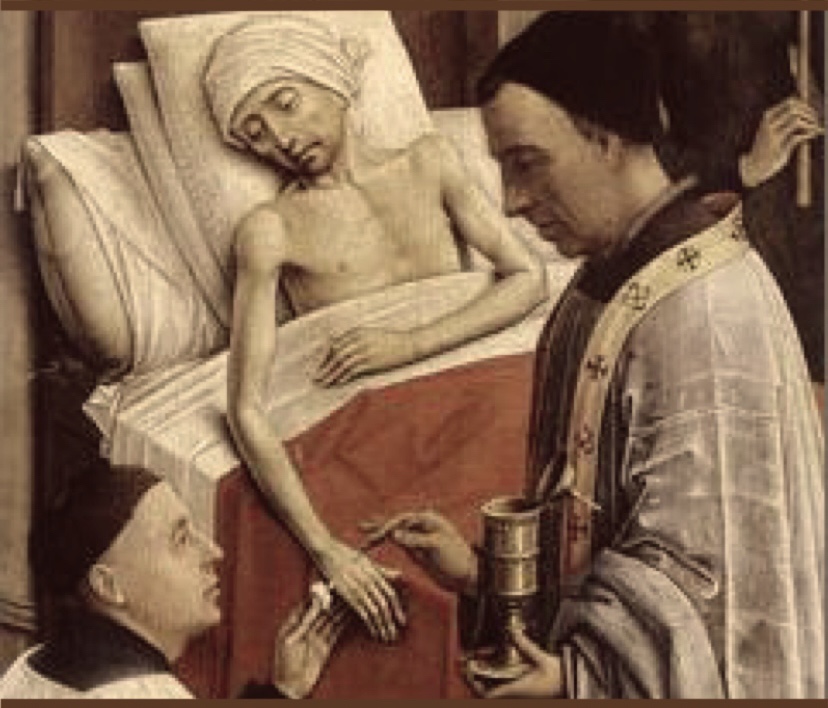 Anointing of the Sick

The Anointing of the Sick is a sacrament administered to someone who is in danger due to sickness or old age, often postponed until someone is near dying.  The sacrament is administered by a priest, using the oleum infirmorum (‘oil of the sick’), an olive oil blessed by a bishop, to anoint the patient’s forehead and hands with the sign of the cross while reciting prayers.

Throughout history, the sacrament has been known by various names in Western Christianity including: the unction of the sick; the unction of holy oil; the blessing of consecrated oil. In the Eastern Church it is technically known as euchelaion (i.e., prayer-oil); but is also known as: elaion hagion (holy oil), hegismenon elaion(consecrated oil), elaiou chrisis (anointing with oil), chrisma (anointing).  The most common name for the sacrament found in history is Extreme Unction (meaning final anointing). The first writer known to have used this term was the scholastic theologian and Bishop of Paris, Peter Lombard (died 1160).  The official name was changed to Anointing of the Sick in the 1970’s to reflect Church teaching that the sacrament is to be conferred on those who are “dangerously ill”.

Biblical evidence concerning the basis for the sacrament of anointing of the sick is found in James 5:14–15: “Is any man sick among you? Let him bring in the priests of the church and let them pray over him, anointing him with oil in the name of the Lord. And the prayer of faith shall save the sick man. And the Lord shall raise him up: and if he be in sins, they shall be forgiven him.” Matthew 10:8 and Mark 6:13 both refer to the Apostles curing the sick and Mark 6:13 states that this done with anointing them with oil.

God does not always heal the physical infirmities that afflict us. Paul preached to the Galatians while he was afflicted by a “bodily ailment” (Gal. 4:13– 14). He also mentions that he had to leave his companion Trophimus in the town of Miletus because he was too sick to travel (2 Tim. 4:20). In his first letter to Timothy, Paul urges his young protégé to “no longer drink only water, but to use a little wine for the sake of your stomach and your frequent ailments” (1 Tim. 5:23). Notice that Paul does not tell Timothy to pray harder and have more faith that God will heal him from his stomach ailment. Rather, he tells him how to manage the illness through medicinal means. Of course, our healing, like all things, is subject to God’s will. As James pointed out, “You do not know about tomorrow. What is your life? For you are a mist that appears for a little time and then vanishes. Instead you ought to say, ‘If the Lord wills, we shall live and we shall do this or that’” (James 4:14–15).

God may sometimes use suffering from illness or adversity as a spiritual discipline. Scripture says, “It is for discipline that you have to endure. God is treating you as sons; for what son is there whom his father does not discipline? . . . For the moment all discipline seems painful rather than pleasant; later it yields the peaceful fruit of righteousness to those who have been trained by it” (Heb. 12:7, 11).  God also permits these trials for our sanctification; “And to keep me from being too elated by the abundance of revelations, a thorn was given me in the flesh, a messenger of Satan, to harass me, to keep me from being too elated. Three times I besought the Lord about this, that it should leave me; but he said to me, ‘My grace is sufficient for you, for my power is made perfect in weakness.’” (2 Cor. 12:7–9).

“the penitent Christian does not shrink from declaring his sin to a priest of the Lord and from seeking medicine . . . [of] which the apostle James says: ‘If then there is anyone sick, let him call the presbyters of the Church, and let them impose hands upon him, anointing him with oil in the name of the Lord; and the prayer of faith will save the sick man, and if he be in sins, they shall be forgiven him’” –Homilies on Leviticus 2:4 (250 A.D.)

“We beseech you, Savior of all men, you that have all virtue and power, Father of our Lord and Savior Jesus Christ, and we pray that you send down from heaven the healing power of the only-begotten [Son] upon this oil, so that for those who are anointed . . . it may be effected for the casting out of every disease and every bodily infirmity . . . for good grace and remission of sins” –The Sacramentary of Serapion 29:1 (350 A.D.)

“As often as some infirmity overtakes a man, let him who is ill receive the body and blood of Christ; let him humbly and in faith ask the presbyters for blessed oil, to anoint his body, so that what was written may be fulfilled in him: ‘Is anyone among you sick? Let him bring in the presbyters, and let them pray over him, anointing him with oil; and the prayer of faith will save the sick man, and the Lord will raise him up; and if he be in sins, they will be forgiven him. . . . See to it, brethren, that whoever is ill hasten to the church, both that he may receive health of body and will merit to obtain the forgiveness of his sins” –Sermons 13[325]:3 (ca 500 A.D.)