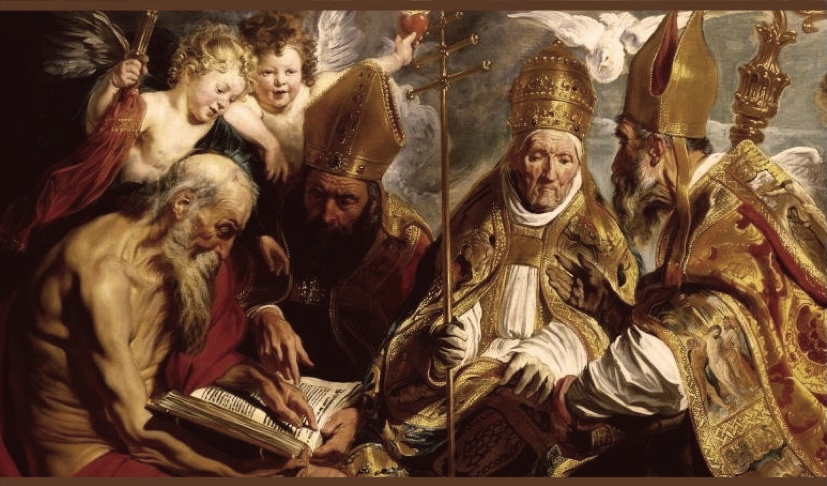 The Doctors of the Church

The Doctors of the Church (Latin: Doctor Ecclesiae) are so called because in Latin doctor means “teacher”.  It is a title given by the Catholic Church to saints recognized as having made a significant contribution to theology or doctrine through their research, study, or writing.  In the Western Latin church, four Fathers of the Church were given this title in the early Middle Ages: Pope Gregory the Great, Ambrose, Augustine, and Jerome. These “Four Doctors” became a commonplace notion among scholastic theologians in the Middle Ages.  In the Eastern Byzantine Church, three Fathers of the Church were held in pre-eminence: John Chrysostom, Basil the Great, and Gregory of Nazianzus, who were known together as the “Three Hierarchs“.  Later, Athanasius of Alexandria was added to the three hierarchs, creating an analogous “Four Eastern Doctors of the Church“.  Together, these eight men are referred to as the “Great Doctors“.

The last Church Father to be given the title was Irenaeus of Lyons.  Until 1970, no woman had been named a Doctor of the Church, but since then, four additions to the list have been women: Teresa of Ávila, Catherine of Siena, Thérèse de Lisieux, and Hildegard of Bingen.  Other notable Doctors of the Church include:  Thomas Aquinas, Bonaventure, Anselm of Canterbury, Bede the Venerable, Peter Damian, Bernard of Clairvaux, Anthony of Padua, John of the Cross, Francis de Sales, Robert Bellarmine, and Alphonsus Liguori.

Doctors of the Church: