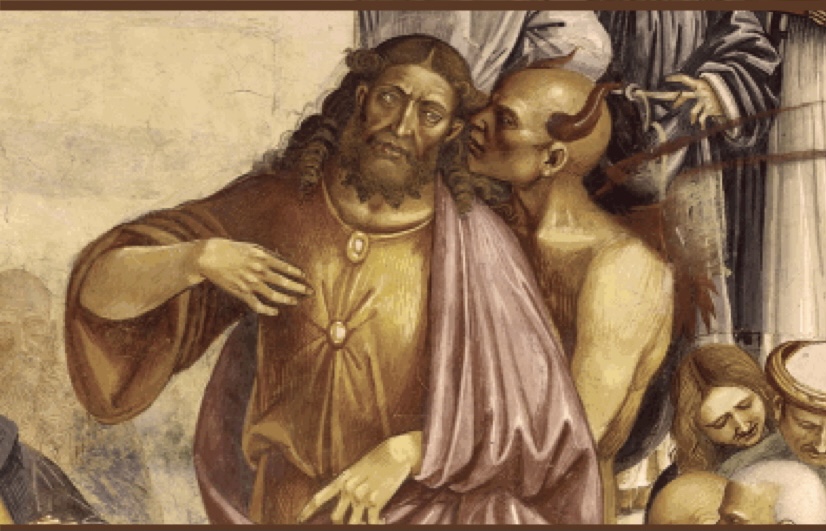 “[T]he whole time of your faith will not profit you unless you are made complete in the last time. For in the last days false prophets and corrupters shall be multiplied, and sheep shall be turned into wolves . . . and then shall the deceiver of the world appear, pretending to be the Son of God, and [he] shall do signs and wonders, and the earth shall be delivered into his hands” (Didache 16:3-4 [A.D. 70]).

“Everyone who does not confess that Jesus Christ has come in the flesh is an antichrist [1 John 4:2-3, 2 John 7]; whoever does not confess the testimony of the cross is of the devil; and whoever perverts the sayings of the Lord for his own desires, and says that there is neither resurrection nor judgment, such a one is the firstborn of Satan” (Letter to the Philadelphians 7:1 [A.D. 135]).

“[B]y means of the events which shall occur in the time of the Antichrist it is shown that he, being an apostate and a robber, is anxious to be adored as God, and that although a mere slave, he wishes to be proclaimed as king. For he, being endued with all the power of the devil, shall not come as a righteous king nor as a legitimate king in subjection to God, but as an impious, unjust, and lawless one . . . setting aside idols to persuade [men] that he himself is God, raising himself up as the only idol. . . . Moreover [Paul] has also pointed out this which I have shown in many ways: that the temple in Jerusalem was made by the direction of the true God. For the apostle himself, speaking in his own person, distinctly called it the temple of God [2 Thess. 2:4] . . . in which the enemy shall sit, endeavoring to show himself as Christ” (Against Heresies 5:25:1-2 [A.D. 189]).

“But when this Antichrist shall have devastated all things in this world, he will reign for three years and six months and will sit in the temple at Jerusalem; and then the Lord will come from heaven in the clouds, in the glory of the Father, sending this man and those who follow him into the lake of fire” (ibid., 5:30:4).

“Now as our Lord Jesus Christ, who is also God, was prophesied of under the figure of a lion, on account of his royalty and glory, in the same way have the scriptures also beforehand spoken of Antichrist as a lion, on account of his tyranny and violence. For the deceiver seeks to liken himself in all things to the Son of God. Christ is a lion, so Antichrist is also a lion. Christ is a king, so Antichrist is also a king. The Savior was manifested as a lamb, so he too in like manner will appear as a lamb without; within he is a wolf. The Savior came into the world in the circumcision [i.e., the Jewish race], and he will come in the same manner. . . . The Savior raised up and showed his holy flesh like a temple, and he will raise a temple of stone in Jerusalem” (The Antichrist 6 [A.D. 200]).

“[W]e find it written regarding Antichrist . . . ‘Dan is a lion’s whelp, and he shall leap from Bashan’ [Deut. 33:22]. But that no one may err by supposing that this is said of the Savior, let him attend carefully to the matter. Dan, he says, is a lion’s whelp. And in naming the tribe of Dan, he declared clearly the tribe from which Antichrist is destined to spring. For as Christ springs from the tribe of Judah, so Antichrist is to spring from the tribe of Dan. And that the case stands thus, we see also from the words of Jacob: ‘Let Dan be a serpent, lying upon the ground, biting the horse’s heel’ [Gen. 49:17]. What then is meant by the serpent but Antichrist, that deceiver who is mentioned in Genesis [Gen. 3:1], who deceived Eve and supplanted Adam? . . . [I]t is in reality out of the tribe of Dan, then, that tyrant and king, that dread judge, that son of the devil, is destined to spring and arise” (ibid., 14).

“Above all, moreover, he will love the nation of the Jews. And with all these [Jews] he will work signs and terrible wonders, false wonders and not true, in order to deceive his impious equals. . . . And after that he will build the temple in Jerusalem and will restore it again speedily and give it over to the Jews” (Discourse on the End of the World 23-25 [A.D. 217]).

“[T]he man of sin, the son of perdition, who must first be revealed before the Lord comes, who opposes and exalts himself above all that is called God or that is worshipped; and who is to sit in the temple of God and boast himself as being God. . . . According indeed to our view, he is Antichrist; as it is taught us in both the ancient and the new prophecies, and by the apostle John, who says that ‘already many false prophets have gone out into the world,’ the forerunners of Antichrist, who deny that Christ is come in the flesh, and do not acknowledge Jesus, meaning in God the Creator” (Against Marcion 5:16 [A.D. 210]).

“[B]oth baptism is one and the Holy Spirit is one and the Church, founded by Christ the Lord upon Peter, by a source and principle of unity, is one also. Hence it results that with them [heretics and schismatics] all things are futile and false, nothing that which they have done ought to be approved by us. . . . And the blessed apostle John also, keeping the commandments and precepts of the Lord, has laid it down in his epistle and said, ‘You have heard that Antichrist shall come; even now there are many antichrists, whereby we know that it is the last time . . . ‘[1 John 2:18]. Wherefore we who are with the Lord and maintain the unity of the Lord, and according to his condescension administer his priesthood in the Church, should repudiate and reject and regard as profane whatever his adversaries and the antichrists do” (ibid., 54[69]:19).

“[B]ecause there can be nothing common to falsehood and truth, to darkness and light, to death and immortality, to Antichrist and Christ, we ought by all means to maintain the unity of the Catholic Church and not to give way to the enemies of the faith and truth in any respect. Neither must we prescribe the form of custom, but overcome opposite custom by reason. For neither did Peter, whom first the Lord chose and upon whom he built his Church . . . despise Paul because he had previously been a persecutor of the Church, but admitted the counsel of truth [that Paul gave] . . . furnishing thus an illustration to us both of concord and of patience” (ibid., 70[71]:2-3).

“[A] king shall arise out of Syria, born from an evil spirit, the overthrower and destroyer of the human race, who shall destroy that which is left by the former evil, together with himself. . . . But that king will not only be most disgraceful in himself, but he will also be a prophet of lies, and he will constitute and call himself God, and will order himself to be worshipped as the Son of God, and power will be given to him to do signs and wonders, by the sight of which he may entice men to adore him. . . . Then he will attempt to destroy the temple of God and persecute the righteous people” (Divine Institutes 7:17 [A.D. 307]).

“Having beguiled the Jews by the lying signs and wonders of his magical deceit, until they believe he is the expected Christ, he [the Antichrist] shall afterwards be characterized by all manner of wicked deeds of inhumanity and lawlessness, as if to outdo all the unjust and impious men who have gone before him. He shall display against all men, and especially against us Christians, a spirit that is murderous and most cruel, merciless and wily. For three years and six months only shall he be the perpetrator of such things; and then he shall be destroyed by the glorious second coming from heaven of the only-begotten Son of God, our Lord and Savior Jesus, the true Christ, who shall destroy him with the breath of his mouth [2 Thess. 2:8], and deliver him over to the fire of Gehenna” (Catechetical Lectures 15:12 [A.D. 350]).

“Daniel prophesies of the last judgment in such a way as to indicate that Antichrist shall first come and to carry on his destruction to the eternal reign of the saints. For when in prophetic vision he had seen four beasts, signifying four kingdoms, and the fourth conquered by a certain king, who is recognized as Antichrist, and after this the eternal kingdom of the Son of Man, that is to say, of Christ” (The City of God 20:19 [A.D. 419]).