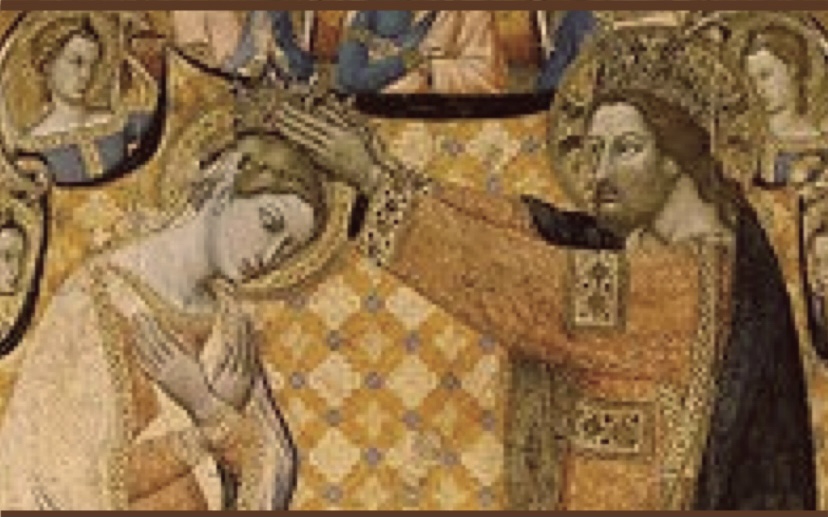 The Coronation of Mary as the Queen of Heaven

Regina Caeli, or “Queen of Heaven” is a title given to the Virgin Mary by the Catholic Church along with, but to a lesser extent, Anglican, Lutheran, and Eastern Orthodox Churches.  The title stems from Mary’s role as the mother of Jesus Christ the King.  Like most Marian doctrines, it has less to do with who Mary is and more to do with who her son is.

Most ancient Near-Eastern kings, including the Davidic kings, practiced polygamy.  Because of this, the king’s mother ruled as queen rather than one of his many wives. For example, compare the humble attitude of Bathsheba as spouse of King David (1 Kgs. 1:16–17, 31) with her majestic dignity as mother of the next king, Solomon (1 Kgs. 2:19–20). As spouse of the king, Bathsheba bows with her face to the ground and does obeisance to her husband, David, upon entering his royal chamber. In contrast, after her son Solomon assumed the throne and she became queen mother, Bathsheba receives a glorious reception upon meeting with her royal son:  In the Old Testament, the Mother of the King was called the gebirah, meaning “Great Lady” or “Queen Mother” and held great power as advocate with the king.  1 Kings 2:19-20 describes Solomon’s mother, Bathsheba, as being seated on a throne at his right, which has great significance because being ‘seated at the the right hand’ was a place of ultimate honor.  Along with a throne, Jeremiah describes the Queen Mother as also possessing a crown (Jer. 13:18, 20).  Throughout 1 & 2 Kings, whenever Judean kings are listed, it’s always with their mothers. (1 Kings 15:1-2, 2 Kings 8:25-26, 12:1, 14:1-2, 15:1-2, 18:1-2, 22:1). 1 Kings 2:17-20 also shows how the queen mother served as an advocate for the people, carrying petitions to the king: “So Bathsheba went to King Solomon, to speak to him on behalf of Adonijah. And the king rose to meet her, and bowed down to her; then he sat on his throne and had a seat brought for the king’s mother; and she sat on his right. Then she said, ‘I have one small request to make of you; do not refuse me.’ And the king said to her, ‘Make your request, my mother; for I will not refuse you’” (1 Kgs. 2:19–20).

Mary’s queenship, then, is simply a share in her son Jesus’ kingship.  In Luke 1:32, when the archangel Gabriel announces that Christ  “…will be called the Son of the Most High; and the Lord God will give to him the throne of his father David. He will rule over the house of Jacob forever and his reign will be without end,” the biblical precedent in ancient Israel would be that the mother of the king becomes the queen mother.  When Isa. 7:13–14 says “Behold, a young woman shall conceive and bear a son and shall call his name Emmanuel” it is in reference to both the next king (Hezekiah) and Jesus (Matt. 1:23).  The young woman in the passage would have been understood by the Jews to be the next Queen Mother.  Just as the Queen Mothers were always listed along with the Davidic Kings, Mary is included at the end of Christ’s genealogy (Matt 1:16) and Matthew frequently uses the phrase “the child and his mother” (Matt 1:18, 2:11, 13, 14, 20, 21).  In Luke 1:43, Elizabeth greets Mary with the title “the mother of my Lord.”  Mary also seen as acting as an advocate to the King in John 2:2-5:  “Jesus and his disciples had also been invited to the wedding.  When the wine gave out, the mother of Jesus said to him, “They have no wine.”  And Jesus said to her, “Woman, what concern is that to you and to me? My hour has not yet come.”  His mother said to the servants, “Do whatever he tells you.”  Finally, Mary’s queenship in heaven is revealed in Revelation 12: “And a great portent appeared in heaven, a woman clothed with the sun, with the moon under her feet, and on her head a crown of twelve stars; she was with child and she cried out in her pangs of birth, in anguish for delivery” (Rev. 12:1–2).  Although this also represents the Church, the fact that the child is clearly Christ points to the woman also being Mary, crowned.

Side note: The prophet Jeremiah writing circa 628 BC refers to a “queen of heaven” in chapters 7 and 44 of the Book of Jeremiah when he scolds the people for having “sinned against the Lord” due to their idolatrous practices of burning incense, making cakes, and pouring out drink offerings to her.  This title was probably given to Asherah, a Canaanite idol and goddess worshipped in ancient Israel or possibly the Mesopotamian goddess Astarte.  It is clear, however, that this text is unrelated to Mary as the Queen of Heaven as these pagan goddesses did not exist in reality. Mary, on the other hand, was a real historical person who is queen by virtue of the fact that her son is king.  Just as the Greek belief in Apollo or the Egyptian belief in Horus does not discount Christ as the Son of God, neither does the belief in these pagan goddesses discount Mary as the authentic Queen of Heaven.

Jer. 13:18, 20
“Say to the king and the queen mother: ‘Take a lowly seat, for your beautiful crown has come down from your head. . . . Lift up your eyes and see those who come from the north. Where is the flock that was given you, your beautiful flock?’”

“Queen of all after the Trinity, Consoler after the Paraclete, Mediatrix of the whole world after the Mediator.”  –J. Carol, 1:232.

“She, the Lady above heaven and earth, must…have a heart so humble that she might have no shame in washing the swaddling clothes or preparing a bath for St. John the Baptist, like a servant girl. What humility! It would surely have been more just to have arranged for her a golden coach, pulled by 4,000 horses, and to cry and proclaim as the carriage proceeded: ‘Here passes the woman who is raised far above all women, indeed above the whole human race.’” –Luther’s Works, 21:327.  A sermon Luther preached on July 2, 1532, the Feast of the Visitation

“She was not filled with pride by this praise…this immense praise: ‘No woman is like unto thee! Thou art more than an empress or a queen…blessed above all nobility, wisdom, or saintliness!’” –Lutheran Works 36:208, 45:107.

“The veneration of Mary is inscribed in the very depths of the human heart.”-Sermon, September 1, 1522 [Martin Luther, Weimar edition of Martin Luther’s Works].

“Is Christ only to be adored? Or is the holy Mother of God rather not to be honoured? This is the woman who crushed the Serpent’s head. Hear us. For your Son denies you nothing.” –Martin Luther, Weimar edition of Martin Luther’s Works, English translation edited by J. Pelikan [Concordia: St. Louis], Volume 51, 128-129]. Luther made this statement in his last sermon at Wittenberg in January 1546.

“She is the highest woman and the noblest gem in Christianity after Christ. ..She is nobility, wisdom, and holiness personified. We can never honor her enough. Still honor and praise must be given to her in such a way as to injure neither Christ nor the Scriptures.” –Sermon, Christmas, 1531

“No woman is like you. You are more than Eve or Sarah, blessed above all nobility, wisdom, and sanctity.” –Sermon, Feast of the Visitation. 1537

“One should honor Mary as she herself wished and as she expressed it in the Magnificat. She praised God for his deeds. How then can we praise her? The true honor of Mary is the honor of God, the praise of God’s grace.. .Mary is nothing for the sake of herself, but for the sake of Christ…Mary does not wish that we come to her, but through her to God.” –Explanation of the Magnificat, 1521

“It is the consolation and the superabundant goodness of God, that man is able to exult in such a treasure. Mary is his true Mother, Christ is his brother. God is his father.” –Sermon. Christmas, 1522

“Mary is the Mother of Jesus and the Mother of all of us even though it was Christ alone who reposed on her knees…If he is ours, we ought to be in his situation; there where he is, we ought also to be and all that he has ought to be ours, and his mother is also our mother.”  –Sermon, Christmas, 1529

“Our prayer should include the Mother of God.. .What the Hail Mary says is that all glory should be given to God, using these words: “Hail Mary, full of grace. The Lord is with thee; blessed art thou among women and blessed is the fruit of thy womb, Jesus Christ. Amen!” You see that these words are not concerned with prayer but purely with giving praise and honor.. .We can use the Hail Mary as a meditation in which we recite what grace God has given her. Second, we should add a wish that everyone may know and respect her…He who has no faith is advised to refrain from saying the Hail Mary.” –Personal Prayer Book, 1522

“She can hardly be compared with any of the other saints, but should by rights be elevated above all of them.”(Quoted in Max Thurian, Mary, Mother of All Christians (New York: Herder and Herder, 1964), 89.)

“For this reason we believe that the Virgin Mary, Begetter of God, the most pure bed and temple of the Holy Spirit, that is, her most holy body, was carried to heaven by angels.” -Bullinger’s 1539 polemical treatise against idolatry, De origine erroris, Caput XVI (Chapter 16), p. 70

“Mary’s name shall not disappear in anonymity, but shall be recalled in every age and praised as holy. Evangelical Protestantism must also learn to sing this song.” -K. E. Skydsgaard, One in Christ, Protestant and Catholic (Philadelphia: Muhlenberg, 1957)

“There are many things Catholics and Protestants hold in common on the doctrine of Mary. These include her being the most blessed among women, her virgin conception of Christ the God-man, and by virtue of that her being in this sense ‘the Mother of God.” –Roman Catholics and Evangelicals: Agreements and Differences