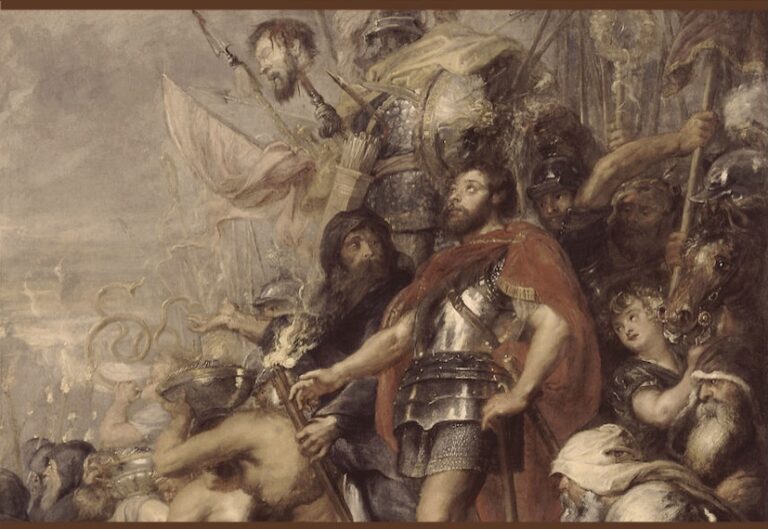 Protestants sometimes accuse Catholics of adding seven books to the Old Testament, namely 1 and 2 Maccabees, Sirach, Wisdom, Baruch, Tobit, and Judith.  These books are known as the Deuterocanon by Catholics and as the Apocrypha by Protestants.  Despite this accusation, history clearly demonstrates that it was not Catholics who added the books, but rather Protestants who removed them.  The reason most Protestants claim for removing them is that they were not included in the current Jewish canon.  There are several problems with this argument: 1)  The authority of the Apostles superseded that of Jewish rabbis, 2)  History indicates that the earliest Christians used the Septuagint version of the Old Testament, which included the Deuterocanon, and 3)  The Deuterocanon had been included in every Christian Bible until the Westminster Confession of Faith in 1646.

The Old Testament took over one thousand years to compile, and the list of inspired books grew continuously as God’s word was revealed. This gradual accretion of inspired writings over time indicates that the Jewish people felt no need for a set canon but rather remained open to further revelation.  At the time of Christ, the Jews did not have one formal canon of Scripture, but rather several.  The Samaritans and the Sadducees accepted only the Torah (the 5 Books of Moses).  The Pharisees accepted the modern Jewish canon, while Greek speaking Jews followed the Septuagint.  The Septuagint was a Greek translation of the Old Testament that was translated in Alexandria, Egypt by Jewish rabbis who chose to include the Deuterocanon. Following the Diaspora, the majority of Jews lived outside of Jerusalem at the time and were increasingly dependent upon the Greek language.  Because of this, the use of the Septuagint, and thus the Deuterocanon,  was widespread.  The Dead Sea Scrolls, which contain Jewish writings from the years 400 B.C. to 100 A.D. include copies of deuterocanonical books like Sirach, Tobit, and Baruch, which shows that at least some Jews at the time considered them to be part of the Writings.  As Christianity grew as a rival to Judaism and spread the use of the Septuagint to Gentile converts, Orthodox Jews felt the need to separate themselves by rejecting the Greek canon in favor of the Hebrew one.  Even today, however, Ethiopian Jews still use the same Old Testament as Catholics.

Another argument sometimes presented is that the Deuterocanon is not quoted in the New Testament.  Being quoted elsewhere in Scripture, however, is not a prerequisite for being considered Scripture, considering Ezra, Nehemiah, Esther, Ecclesiastes, The Song of Solomon, Judges, Ruth, Obadiah, Nahum, and Zephaniah are not quoted elsewhere in Scripture either.  On the other hand, non-Scriptural writings are sometimes quoted by Scripture, such as the Assumption of Moses and the Book of Enoch, which is quoted in Jude.  Being quoted by Scripture does not mean these works Scriptural anymore than not being quoted means they are not Scripture.  Although not a direct quotation, Hebrews 11:35, which says, “Women received their dead by resurrection. Some were tortured, refusing to accept release that they might rise again to a better life.” is a reference to the Deuterocanon in 2 Maccabees 7.

When it comes to the Old Testament, scholars are in agreement that the Early Christian Church almost exclusively used the Septuagint (the Greek translation of the Hebrew O.T., which included the deuterocanon, or Apocrypha).  The Septuagint was used extensively in the Near East by rabbis and was accepted as authoritative by the Jews of Alexandria and Greek-speaking countries, so as the early Church developed, this was naturally the version Christians used.  This is illustrated by the fact that the majority of Old Testament quotations found in the New Testament can be shown to come directly from the Septuagint version.  The Septuagint version is also the one quoted most by the Church Fathers.  The Deuterocanon was included in varying degrees in almost every early list of Christian canons and appeared in every Bible from the Council of Rome up to, and including Luther’s Bible in 1534 A.D. It was not completely excluded until the Westminster Confession of Faith in 1646 A.D.

Early Christian Use of the Deuterocanon:

The Letter of Barnabas

“Since, therefore, [Christ] was about to be manifested and to suffer in the flesh, his suffering was foreshown. For the prophet speaks against evil, ‘Woe to their soul, because they have counseled an evil counsel against themselves’ [Isa. 3:9], saying, ‘Let us bind the righteous man because he is displeasing to us’ [Wis. 2:12.]” (Letter of Barnabas 6:7 [A.D. 74]).

“Those . . . who are believed to be presbyters by many, but serve their own lusts and do not place the fear of God supreme in their hearts, but conduct themselves with contempt toward others and are puffed up with the pride of holding the chief seat [Matt. 23:6] and work evil deeds in secret, saying ‘No man sees us,’ shall be convicted by the Word, who does not judge after outward appearance, nor looks upon the countenance, but the heart; and they shall hear those words to be found in Daniel the prophet: ‘O you seed of Canaan and not of Judah, beauty has deceived you and lust perverted your heart’ [Dan. 13:56]. You that have grown old in wicked days, now your sins which you have committed before have come to light, for you have pronounced false judgments and have been accustomed to condemn the innocent and to let the guilty go free, although the Lord says, ‘You shall not slay the innocent and the righteous’ [Dan. 13:52, citing Ex. 23:7]” (Against Heresies 4:26:3 [A.D. 189]; Daniel 13 is not in the Protestant Bible).

“Jeremiah the prophet has pointed out that as many believers as God has prepared for this purpose, to multiply those left on the earth, should both be under the rule of the saints and to minister to this [new] Jerusalem and that [his] kingdom shall be in it, saying, ‘Look around Jerusalem toward the east and behold the joy which comes to you from God himself. Behold, your sons whom you have sent forth shall come: They shall come in a band from the east to the west. . . . God shall go before with you in the light of his splendor, with the mercy and righteousness which proceed from him’ [Bar. 4:36—5:9]” (ibid., 5:35:1; Baruch was often considered part of Jeremiah, as it is here).

“What is narrated here [in the story of Susannah] happened at a later time, although it is placed at the front of the book [of Daniel], for it was a custom with the writers to narrate many things in an inverted order in their writings. . . . [W]e ought to give heed, beloved, fearing lest anyone be overtaken in any transgression and risk the loss of his soul, knowing as we do that God is the judge of all and the Word himself is the eye which nothing that is done in the world escapes. Therefore, always watchful in heart and pure in life, let us imitate Susannah” (Commentary on Daniel [A.D. 204]; the story of Susannah [Dan. 13] is not in the Protestant Bible).

“So Daniel, too, when he was required to worship the idol Bel, which the people and the king then worshipped, in asserting the honor of his God, broke forth with full faith and freedom, saying, ‘I worship nothing but the Lord my God, who created the heaven and the earth’ [Dan. 14:5]” (Letters 55:5 [A.D. 253]; Daniel 14 is not in the Protestant Bible).

“[It has been decided] that besides the canonical scriptures nothing be read in church under the name of divine Scripture. But the canonical scriptures are as follows: Genesis, Exodus, Leviticus, Numbers, Deuteronomy, Joshua the Son of Nun, Judges, Ruth, the Kings, four books, the Chronicles, two books, Job, the Psalter, the five books of Solomon [Proverbs, Ecclesiastes, Song of Songs, Wisdom, and a portion of the Psalms], the twelve books of the prophets, Isaiah, Jeremiah, Daniel, Ezekiel, Tobit, Judith, Esther, Ezra, two books, Maccabees, two books . . .” (Canon 36 [A.D. 393]).

“[It has been decided] that nothing except the canonical scriptures should be read in the Church under the name of the divine scriptures. But the canonical scriptures are: Genesis, Exodus, Leviticus, Numbers, Deuteronomy, Joshua, Judges, Ruth, four books of Kings, Paralipomenon, two books, Job, the Psalter of David, five books of Solomon, twelve books of the prophets, Isaiah, Jeremiah, Daniel, Ezekiel, Tobit, Judith, Esther, two books of Esdras, two books of the Maccabees” (Canon 47 [A.D. 397]).

“The whole canon of the scriptures, however, in which we say that consideration is to be applied, is contained in these books: the five of Moses . . . and one book of Joshua [Son of] Nave, one of Judges; one little book which is called Ruth . . . then the four of Kingdoms, and the two of Paralipomenon . . . . [T]here are also others too, of a different order . . . such as Job and Tobit and Esther and Judith and the two books of Maccabees, and the two of Esdras . . . . Then there are the prophets, in which there is one book of the Psalms of David, and three of Solomon. . . . But as to those two books, one of which is entitled Wisdom and the other of which is entitled Ecclesiasticus and which are called ‘of Solomon’ because of a certain similarity to his books, it is held most certainly that they were written by Jesus Sirach. They must, however, be accounted among the prophetic books, because of the authority which is deservedly accredited to them” (Christian Instruction 2:8:13 [A.D. 397]).

“We read in the books of the Maccabees [2 Macc. 12:43] that sacrifice was offered for the dead. But even if it were found nowhere in the Old Testament writings, the authority of the Catholic Church which is clear on this point is of no small weight, where in the prayers of the priest poured forth to the Lord God at his altar the commendation of the dead has its place” (The Care to be Had for the Dead 1:3 [A.D. 421]).

“What sin have I committed if I follow the judgment of the churches? But he who brings charges against me for relating [in my preface to the book of Daniel] the objections that the Hebrews are wont to raise against the story of Susannah [Dan. 13], the Song of the Three Children [Dan. 3:29–68, RSV-CE], and the story of Bel and the Dragon [Dan. 14], which are not found in the Hebrew volume, proves that he is just a foolish sycophant” (Against Rufinius 11:33 [A.D. 401]).

“A brief addition shows what books really are received in the canon. These are the things of which you desired to be informed verbally: of Moses, five books, that is, of Genesis, of Exodus, of Leviticus, of Numbers, of Deuteronomy, and Joshua, of Judges, one book, of Kings, four books, and also Ruth, of the prophets, sixteen books, of Solomon, five books, the Psalms. Likewise of the histories, Job, one book, of Tobit, one book, Esther, one, Judith, one, of the Maccabees, two, of Esdras, two, Paralipomenon, two books” (Letters 7 [A.D. 408]).

“It should be observed that the Old Testament thus admitted as authoritative in the Church was somewhat bulkier and more comprehensive [than the Protestant Bible]. . . . It always included, though with varying degrees of recognition, the so-called apocrypha or deuterocanonical books” –Early Christian Doctrines (5th Rev. Ed.), pg. 53

Bruce M. Metzger
”Nowhere in the New Testament is there a direct quotation from the canonical books of Joshua, Judges, Chronicles, Ezra, Nehemiah, Esther, Ecclesiastes, the Song of Solomon, Obadiah, Zephaniah, and Nahum; and the New Testament allusions to them are few in number.”  –An Introduction to the Apocrypha Revised ed.

the deuterocanonical books “presuppose the validity of the Law and the Prophets and also utilize the Ketubim, or ‘Writings’ collection, which was, at the time, still in the process of formation and not yet closed.”  –The Old Testament Apocrypha: An Introduction