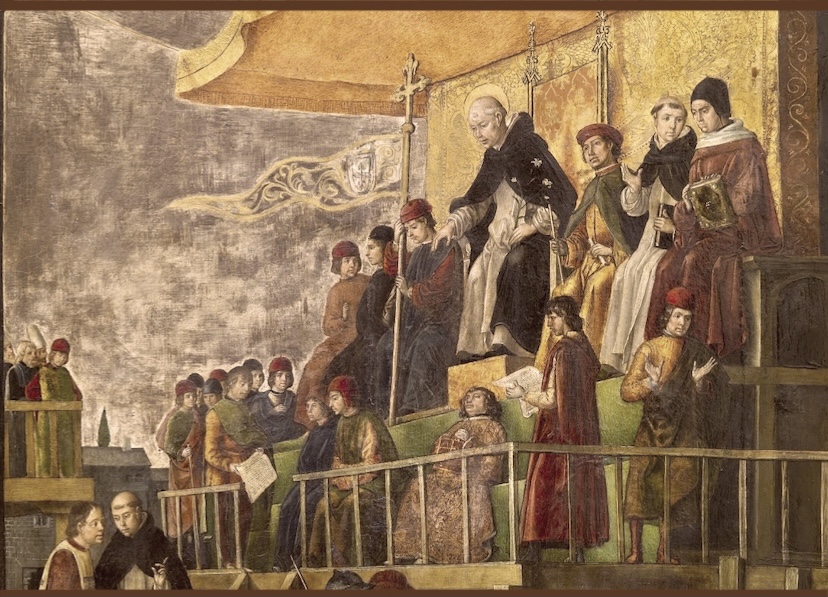 1: Medieval Inquisitions were instituted in response to the
Cathars, a heretical group who taught that the flesh was evil
and thus refused to take oaths, scorned marriage, and promoted
fornication; all of which undermined the fabric of feudalistic society. This led to
civil unrest and, in 1076, the residents of Cambrai mobbed and burned a Cathar.
Pope Gregory VII excommunicated those responsible, but a similar situation happened
in Strassburg in 1114 and the clergy of Leige, in 1145, had to rescue victims from a mob.
2: In 1208 Cathars killed papal legate Pierre de Castelnau and Pope Innocent III
declared a ‘crusade’ against them, stressing education, confession, and clerical reform.
Pope Gregory IX attempted to curb mob mentality by formalizing Inquisition trials.
This was intended to protect the innocent from false accusations as much as it was to
root out heresy. In 1231, he enlisted Dominicans and Franciscans as Inquisitors due to
their impeccable character, their history of encouraging Church reform, as well as their
thorough, systematic, and detailed record keeping. Historian Thomas Madden said:
“the Inquisition was not born out of a desire to crush diversity or oppress people; rather
it was an attempt to stop unjust executions… Heresy was a crime against the State.”
3: No Pope ever had complete control over the Inquisitions. Civil authorities,
Kings, lords, and laity all played a role. Anyone found guilty was turned over to the
State to determine punishment. “Witch trials” were a craze of SECULAR courts.
The Church maintained that witchcraft was a delusion and so it could not be tried.
4: Torture was an ancient secular legal practice dating back to the Roman Empire.
Legendary brutal torture methods were employed and used only in SECULAR courts.
In 1252, Pope Innocent IV authorized the use of torture, but limited it to one time for
limited duration and which COULD NOT result in bloodshed, mutilation, or death.
Inquisitors, however, quickly shunned its use as it rarely resulted in truthful answers.
5: The Spanish Inquisition (the most famous) was established by King Ferdinand II
and Queen Isabella I, whose goals were to unite their kingdoms to a lasting effect.
It was mainly directed at Jews and Muslims and was rooted in fear of invasion from
the Ottoman Empire as well as influenced by Machiavellian political philosophy.
The Spanish Inquisitors consisted of Spanish legal experts rather than priests or clergy.
Gustav Henningsen and Jaime Contreras studied the records of 44,674 cases and
found only roughly 1600 ‘guilty’ verdicts. Of those, only half resulted in execution.
Historians have concluded that most stories about cruel torture and inhumane
prison conditions were falsified and a result of the “Black Legend” -fabrications
created by Spain’s enemies consisting of anti-Spanish and anti-Catholic propaganda.
-See the BBC documentary “The Myth of the Spanish Inquisition.”
6: The Roman Inquisition was the only one directed at Protestants and was the
most benign. Penances consisted of fines, pilgrimages, or the wearing of a cross.
More serious cases included confiscation of property or imprisonment.
-See “Adam Ruins Everything” on Copernicus.
7: For all Inquisitions combined, scholars estimate about 14 people per year were
executed, totaling between 3,000 and 5,000 throughout the entire continent over a
period of 350 years. For perspective, by 1860 a mostly Protestant U.S. was home to
over 4 million black slaves and the infamous “trail of tears” alone resulted in the
death of an estimated 4,000 Native Americans. In other words, while completely
reprehensible, the Inquisitions were only a reflection of society at that time, as both
Martin Luther and John Calvin approved of the execution of others for heresy.
(ex: Jacques Gouet in 1547; and Michael Servetus in 1553). The Boston Martyrs were
a result of Anglican Puritanism and in England and Ireland, Reformers executed
thousands of Catholics (most notably Sir Thomas More and Cardinal John Fisher).