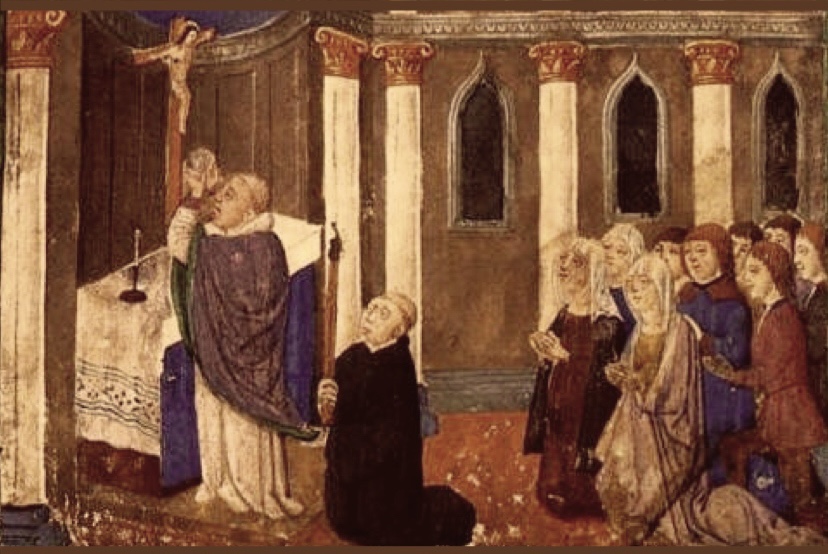 The Liturgy of
the Mass

Liturgy (leitourgia) is a Greek composite word meaning originally a “public duty”.  In the Septuagint it was used for the public service of the temple. In the New Testament, it is used in Heb. 8:6, where it says the high priest of the New Law “has obtained a better liturgy.”  The term “liturgy,” then, normally refers to a standardised order of events observed during a sacramental service of the Church.  The early Christians adopted the word to describe their principal act of worship, the Sunday service (referred to by various terms, including Holy Eucharist, Holy Communion, Mass or Divine Liturgy), which they considered to be a sacrifice.   The Mass is the main Eucharistic liturgical service in many forms of Western Christianity. The term Mass is commonly used in the Catholic Church, and in the Western Rite Orthodox, and Old Catholic churches. The term is used in some Lutheran churches, as well as in some Anglican churches.  Eastern Christian Churches use the term Divine Liturgy in regards to the celebration of the Eucharist.

The worship prescribed by God for the Jews in the Old Testament was liturgical in nature.  For example, in Exodus, we find vestments for priests (Ex. 28), lampstands (37:17-24), and incense (30:1-10, 34-38; 37:25-29).  The Temple, the Passover, and nearly all Jewish rituals, customs, and festivals followed a set liturgical practice.  This practice did not end with the New Testament.  Jesus said, “Do not think that I came to destroy the Law or the prophets. I did not come to destroy but to fulfill” (Matt. 5:17).  Christianity is the fulfillment of Judaism; Christ transformed the Old Covenant ceremonies into the ceremonies of the New Covenant, such as elevating the Passover by instituting the Eucharist.  The early Jewish Christians converts understood Jesus to have fulfilled the Law and the prophets, but continued in their liturgical worship as they continued to meet each day in the Temple and afterwards would gather at a private home to celebrate the Eucharist (Acts 2:46, 3:1).  Multiple passages in the New Testament illustrate that these early Christians viewed ritual as essential to their worship (See Acts 2:42, 1 Corinthians 10:16 and 11:24-29, and Matthew 28:19).  To the early Christians, these liturgical rituals were meant to imitate the Heavenly worship of God, just as Jesus had taught them to pray, “Thy will be done on earth as it is in heaven.”  When we pray the Our Father, therefore, we are saying that our earthly worship should imitate the heavenly praise of the Lord.  Jesus then told them how to accomplish this when he asked them to pray, “Give us this day our daily bread”, which is a clear reference to the Eucharist.

Revelation gives us insight into just how the heavenly worship is mimicked by the Mass.  The book’s activity occurs on “the Lord’s Day,” which is Sunday (1:10), and begins with an address to seven churches in seven cities (1:11-14). “Seven” is a symbolic number in the Bible and means “universal” or “complete”, representing the universal (catholic) Church. The book begins with a blessing (1:3) and the liturgical greeting of “grace” is found both at the beginning (1:4) and at the end (22:1).  The liturgical response “Amen” is continually invoked (1:7, 5:14, 7:12, 19:4, 22:20).  We see the communion of saints (6:911), and angels bringing prayers to the altar in a golden censer that the prayers may rise to God on clouds of incense (8:34).  There is singing (19:6-8), pre-scribed liturgical movement (4:9-10), and incense (5:8).  In Revelation 4, John has a vision of winged creatures who “do not rest day or night, saying: ‘Holy, Holy, Holy, Lord God Almighty, who was and is and is to come!’ ” (Rev. 4:8, Is. 6:3) and in Revelation 4:9-11; “the twenty-four elders [presbyteroi, equivalent to “priests”] fall down before him who sits on the throne and worship him who lives forever and ever and cast their crowns before the throne, saying, ‘You are worthy, our Lord and God, to receive glory and honor and power, for you created all things, and by your will they exist and were created.’ ”  and in 19:1-9: “a great multitude in heaven, saying: ‘Alleluia! Salvation, glory, and might belong to our God, for true and just are his judgments…. Let us rejoice and be glad.  For the wedding day of the Lamb has come, his bride has made herself ready…. Then the angel said to me, ‘Write this: Blessed are those who have been called to the wedding feast of the Lamb.’”  The wedding feast is the Eucharist, of which we partake of here on earth.  We are participants in the celebration of the wedding feast that is happening eternally in Heaven.

The Book of Revelation is not the only Biblical basis for the Mass and it’s liturgies.  The first prayer of the Mass, the sign of the cross, draws the words, “in the name of the Father, the Son and the Holy Spirit,” from Matthew 28:19 and it’s gesture, -the cross over the forehead- is implicitly found Ezekiel 9:4; “Go through Jerusalem and put a mark upon the foreheads of the men who sigh and groan over all the abominations that are committed in it.”  The faithful of Jerusalem were to be marked on their foreheads.  The word for mark in Hebrew is simply the Hebrew letter, taw. The Greek version is the letter tau, which is T-shaped. So the sign of the cross not only reminds Christians of the cross of Christ, but also of faithfulness.  Then, the greeting of the introductory rite where the priest says, “The Lord be with you,” and the congregation responds, “And with your spirit,” comes from 2 Timothy 4:22: “The Lord be with your spirit.”  The Confiteor, which is the prayer that begins “I confess to almighty God,” is also rooted in biblical tradition as the act of verbal confession was an essential part of public worship for ancient Israel (Neh. 9:2, Leviticus 5:5).  The Gloria: “Glory to God in the highest, and on earth peace to people of good will,” comes from Luke 2:14 and “heavenly king” from Ps. 98:6, 99:4.

The next part of the Mass is the Liturgy of the Word.  In Exodus, Moses reads Scripture in a liturgical setting as we’re told that he “took the book of the covenant, and read it in the hearing of the people…” (Ex. 24:7).  Just as modern Catholics respond to the reading of Scripture with “Thanks be to God,” the Israelites responded by saying, “All that the Lord has spoken we will do, and we will be obedient” (Ex. 24:7).  The prayer ‘alleluia’ (From the Hebrew words “hallel” and “Yahweh” meaning “praise God”), comes from the Jewish Hallel Psalms (Ps. 113-118), which are prayed in the Jewish Passover liturgy to give praise to Yahweh for deliverance from Egypt.  The alleluia is also found in John’s heavenly vision of the wedding supper of the Lamb at which the angels praise God for his work of salvation through Jesus and announce the coming of the Lamb for his wedding feast (cf. Rev. 19:1-9). Therefore, the Catholic prayer of alleluia prior to the Gospel reading signals the celebration of a new Passover and a participation in the heavenly marriage feast of the Lamb.  The practice of standing for the reading of the Gospel can be found in Nehemiah 8:5, where the whole assembly stands when Ezra, the priest, begins to read from the book of the covenant.

Next is the Liturgy of the Eucharist, where the bread and wine calls to mind the sacrifice of thanksgiving (Greek, eucharistia) offered by the priest-king Melchizedek in Genesis 14:14-16 and that Jesus is a priest according to the order of Melchizedek (Heb. 5:10).  The prayer for acceptance of sacrifice can be found in Daniel 3:39-40, where Azariah prays “But with contrite heart and humble spirit let us be received…”. The priestly act of washing hands models Leviticus 30:18-21 where Moses instructs the Levitical priests to wash their hands outside the tabernacle before entering to perform their priestly duties.  The Sanctus, “Holy, holy, holy is the Lord of hosts” comes directly from Isaiah 6:3 and Revelation 4:8.  This represents the fact that we, here on earth, are joining in with the choirs of angels in Heaven as they sing.  This is followed by the priest’s words of institution; “This is my body . . . this is my blood,” which are Christ’s own words at the Last Supper in the Gospels and St. Paul’s letter to the Corinthians (see Matt. 26:26-28, Mark 14:22-24, Luke 22:19-20, 1 Cor. 11:24-25).  The phrase “the blood of the new and eternal covenant” is a combination of Luke’s account, in which he records Jesus to say “the new covenant in my blood” (Luke 22:20) and Matthew’s version, in which Jesus is recorded saying, “For this is my blood of the covenant” (Matt. 26:28) and echoes Exodus 24, where Moses says, “Behold the blood of the covenant which the Lord has made with you in accordance with all these words” (Ex. 24:8).

Finally, the author of Hebrews describes Jesus as “a minister in the sanctuary and the true tent which is set up not by man but by the Lord” (Heb. 8:2) and as an eternal priest in heaven (cf. Heb. 7:25) and because “every high priest is appointed to offer gifts and sacrifices” (Heb. 8:3a) “it is necessary for this priest also to have something to offer” (Heb. 8:3b).  Christ, then, eternally offers Himself to the Father as St. John describes Jesus appearing in the heavenly sanctuary as a slain lamb (cf. Rev. 5:6). The Eucharist makes present the one and same sacrifice of Christ in the appearance of bread and wine (cf. CCC 1366-1367) which was offered once and for all on the cross. Eucharistic Prayer IV, thus reads; “we offer you his body and blood, the sacrifice acceptable to you which brings salvation to the whole world.”

Liturgy in the Early Church:

“The power of liturgy to lift us out of our narrow practical and material pursuits is not dependent on our understanding of every actual word we are saying, any more than our emotional submission to classical music’s soaring magic is dependent on our ability to read the score that produced it. . . . An ancestral, globally employed language like Hebrew or Latin provides a context for predictable and organic communion amongst those present at the service. Through regular engagement, even though rote, with a universally recognized language, worshippers are subliminally imbued with a common motivational narrative from the past, common moral goals in the present and intimations of a common destiny in the future.” –National Post, “Latin’s Second Coming,” October 18, 2006.

“God’s people have been saved from the whoredoms of the world to become the Bride of his only begotten Son; and the constant token of this fact is the Church’s weekly celebration of her sacred feast, the Holy Eucharist. The absolute fidelity of this promise is underscored by the angel’s assurance to John that these are the true words of God [Rev. 19:9]. It should go without saying (but, unfortunately, it cannot), that the Eucharist is the center of Christian worship. . . The greatest privilege of the Church is her weekly participation in the Eucharistic meal, the Marriage Supper of the Lamb.

“It is a tragedy that so many churches in our day neglect the Lord’s Supper, observing it only on rare occasions (some so- called churches have even abandoned Communion altogether). What we must realize is that the official worship service of the Church on the Lord’s Day is not merely a Bible study or some informal get-together of like-minded souls; to the contrary, it is the formal wedding feast of the Bride with the Bridegroom.” –David Chilton’s The Days of Vengeance: An Exposition of the Book of Revelation (Fort Worth: Dominion, 1987).