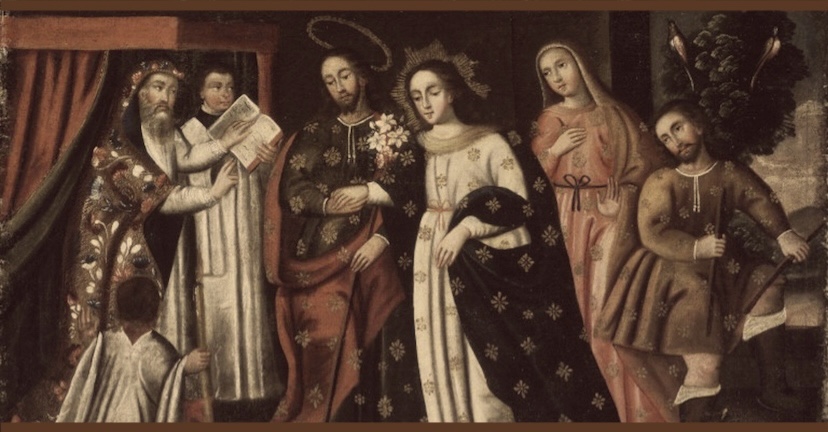 The Catechism of the Catholic Church states: “The Church attaches great importance to Jesus’ presence at the wedding at Cana. She sees in it the confirmation of the goodness of marriage and the proclamation that thenceforth marriage will be an efficacious sign of Christ’s presence.”  When God created humanity, he instituted marriage. This is evidenced in the first two chapters of the Bible: “So God created man in his own image, in the image of God he created him; male and female he created them. . . . Therefore a man leaves his father and his mother and cleaves to his wife, and they become one flesh” (Gen. 1:27, 2:24).  The phrase “they become one flesh” implies that God created male and female so as to engage in procreative activity and that He intended marriage to be a lifelong relationship.  Thus, husband and wife enter a covenantal relationship that serves to make a family.

When Jesus came, he elevated matrimony to the same status it had originally possessed between Adam and Eve—the status of a sacrament. Thus, any valid marriage between two baptized people is a sacramental marriage and, once consummated, cannot be dissolved.  During Jesus’ public ministry, when the Pharisees challenged him on the issue of divorce and remarriage, he responded, “For your hardness of heart Moses allowed you to divorce your wives, but from the beginning it was not so” (Matt. 19:8).  Jesus, therefore, taught that if anyone so married divorces and remarries, that person is living in perpetual adultery, a state of mortal sin; “Everyone who divorces his wife and marries another commits adultery, and he who marries a woman divorced from her husband commits adultery” (Luke 16:18; cf. Mark 10:11–12).  Paul was equally insistent on this fact, declaring, “Thus a married woman is bound by law to her husband as long as he lives. . . . Accordingly, she will be called an adulteress if she lives with another man while her husband is alive” (Rom. 7:2–3).

Explicit classification of marriage as a sacrament came in reaction to the contrary teaching of Catharism that marriage and procreation were evil: the first official declaration that marriage is a sacrament was made at the 1184 Council of Verona as part of a condemnation of the Cathars.  The Fourth Lateran Council of 1215 stated in response to the teaching of the Cathars: “For not only virgins and the continent but also married persons find favour with God by right faith and good actions and deserve to attain to eternal blessedness.”  In 1208, Pope Innocent III required members of another religious movement, that of the Waldensians, to recognize that marriage is a sacrament as a condition for being received back into the Catholic Church, as the heresy had previously condemned the sacrament of marriage.  Marriage was also included in the list of the seven sacraments at the Second Council of Lyon in 1274.

In the 16th century, various groups adhering to the Protestant Reformation rejected to different degrees the sacramental nature of most Catholic sacraments.  In reaction, the Council of Trent on 3 March 1547 carefully named and defined the Catholic Church’s sacraments, reaffirming the teaching that marriage is a sacrament − from 1184, 1208, 1274 and 1439. Recalling scripture, the apostolic traditions and the declarations of previous councils and of the Church Fathers, the bishops declared that there were precisely seven sacraments, with marriage one of them, and that all seven are truly and properly sacraments.  On 11 November 1563, the Council of Trent condemned the view that “the marriage state is to be placed above the state of virginity, or of celibacy, and that it is not better and more blessed to remain in virginity, or in celibacy, than to be united in matrimony”.

The Early Church on Matrimony:

“Thus a married woman is bound by law to her husband as long as he lives. . . . Accordingly, she will be called an adulteress if she lives with another man while her husband is alive”

“What then shall the husband do, if the wife continue in this disposition [adultery]? Let him divorce her, and let the husband remain single. But if he divorce his wife and marry another, he too commits adultery” (The Shepherd 4:1:6 [A.D. 80]).

“[I]t becomes both men and women who marry to form their union with the approval of the bishop, that their marriage may be according to God, and not after their own lust.” -Letter to Polycarp (107 A.D.)

“In regard to chastity, [Jesus] has this to say: ‘If anyone look with lust at a woman, he has already before God committed adultery in his heart.’ And, ‘Whoever marries a woman who has been divorced from another husband, commits adultery.’ According to our Teacher, just as they are sinners who contract a second marriage, even though it be in accord with human law, so also are they sinners who look with lustful desire at a woman. He repudiates not only one who actually commits adultery, but even one who wishes to do so; for not only our actions are manifest to God, but even our thoughts” (First Apology 15 [A.D. 151]).

“That Scripture counsels marriage, however, and never allows any release from the union, is expressly contained in the law: ‘You shall not divorce a wife, except for reason of immorality.’ And it regards as adultery the marriage of a spouse, while the one from whom a separation was made is still alive. ‘Whoever takes a divorced woman as wife commits adultery,’ it says; for ‘if anyone divorce his wife, he debauches her’; that is, he compels her to commit adultery. And not only does he that divorces her become the cause of this, but also he that takes the woman and gives her the opportunity of sinning; for if he did not take her, she would return to her husband” (Miscellanies 2:23:145:3 [A.D. 208]).

“Just as a woman is an adulteress, even though she seem to be married to a man, while a former husband yet lives, so also the man who seems to marry her who has been divorced does not marry her, but, according to the declaration of our Savior, he commits adultery with her” (Commentaries on Matthew 14:24 [A.D. 248]).

“Likewise, women who have left their husbands for no prior cause and have joined themselves with others, may not even at death receive Communion” (Canon 8 [A.D. 300]).

“Likewise, a woman of the faith [i.e., a baptized person] who has left an adulterous husband of the faith and marries another, her marrying in this manner is prohibited. If she has so married, she may not receive Communion—unless he that she has left has since departed from this world” (Canon 9).

“If she whom a catechumen [an unbaptized person studying the faith] has left shall have married a husband, she is able to be admitted to the fountain of baptism. This shall also be observed in the instance where it is the woman who is the catechumen. But if a woman of the faithful is taken in marriage by a man who left an innocent wife, and if she knew that he had a wife whom he had left without cause, it is determined that Communion is not to be given to her even at death” (Canon 10).

“No one is permitted to know a woman other than his wife. The marital right is given you for this reason: lest you fall into the snare and sin with a strange woman. ‘If you are bound to a wife do not seek a divorce’; for you are not permitted, while your wife lives, to marry another” (Abraham 1:7:59 [A.D. 387]).

“You dismiss your wife, therefore, as if by right and without being charged with wrongdoing; and you suppose it is proper for you to do so because no human law forbids it; but divine law forbids it. Anyone who obeys men ought to stand in awe of God. Hear the law of the Lord, which even they who propose our laws must obey: ‘What God has joined together let no man put asunder’” (Commentary on Luke 8:5 [A.D. 389]).

“So long as a husband lives, be he adulterer, be he sodomite, be he addicted to every kind of vice, if she left him on account of his crimes, he is her husband still and she may not take another” (Letters 55:3 [A.D. 396]).

“Wherever there is fornication and a suspicion of fornication, a wife is freely dismissed. Because it is always possible that someone may calumniate the innocent and, for the sake of a second joining in marriage, act in criminal fashion against the first, it is commanded that when the first wife is dismissed, a second may not be taken while the first lives” (Commentaries on Matthew3:19:9 [A.D. 398]).

“[T]he practice is observed by all of regarding as an adulteress a woman who marries a second time while her husband yet lives, and permission to do penance is not granted her until one of them is dead” (Letters 2:13:15 [A.D. 408]).

“Undoubtedly the substance of the sacrament is of this bond, so that when man and woman have been joined in marriage they must continue inseparably as long as they live, nor is it allowed for one spouse to be separated from the other except for cause of fornication. For this is preserved in the case of Christ and the Church, so that, as a living one with a living one, there is no divorce, no separation forever” (Marriage and Concupiscence 1:10:11 [A.D. 419]).

“In marriage, however, let the blessings of marriage be loved: offspring, fidelity, and the sacramental bond. Offspring, not so much because it may be born, but because it can be reborn; for it is born to punishment unless it be reborn to life. Fidelity, but not such as even the unbelievers have among themselves, ardent as they are for the flesh. . . . The sacramental bond, which they lose neither through separation nor through adultery, this the spouses should guard chastely and harmoniously” (ibid., 1:17:19).