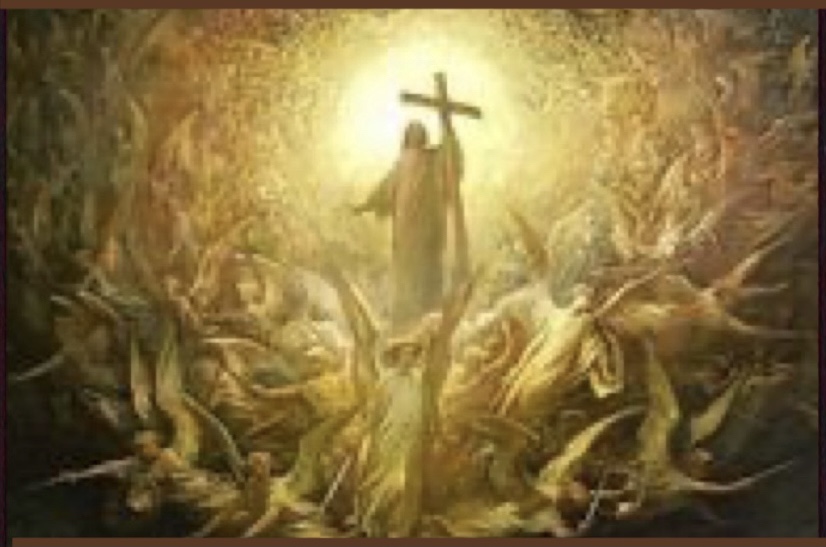 According to ‘Rapture’ doctrine, when Christ returns, all of the elect who have died will be raised and transformed into a glorious state, along with the living elect, and then be caught up to be with Christ. The key text referring to the rapture is 1 Thessalonians 4:16–17, which states, “For the Lord himself will descend from heaven with a cry of command, with the archangel’s call, and with the sound of the trumpet of God. And the dead in Christ will rise first; then we who are alive, who are left, shall be caught up together with them in the clouds to meet the Lord in the air; and so we shall always be with the Lord.”

Premillennialists hold, as do virtually all Christians (except certain postmillennialists), that the Second Coming will be preceded by a time of great trouble and persecution of God’s people (2 Thess. 2:1–4). This period is often called the tribulation. Until the nineteenth century, all Christians agreed that the rapture—though it was not called that at the time—would occur immediately before the Second Coming, at the close of the period of persecution. This position is today called the “post-tribulational” view because it says the rapture will come after the tribulation.

But in the 1800s, some began to claim that the rapture would occur before the period of persecution. This position, now known as the “pre-tribulational” view, also was embraced by John Nelson Darby, an early leader of a Fundamentalist movement that became known as Dispensationalism. Darby’s pre-tribulational view of the rapture was then picked up by a man named C. I. Scofield, who taught the view in the footnotes of his Scofield Reference Bible. Many Protestants who read the Scofield Reference Bible uncritically adopted the pre-tribulational view, even though no Christian had heard of it in the previous 1800 years of Church history.

The first problem with this theory is found in 1 Thessalonians 4:16-17 where it says “and the dead in Christ will rise first.”  This makes it clear that Paul is talking about the last day, or the end of time, because John 6:39-44, 54 and John 11:24 tells us that the dead will not be raised until the last day.  It then says the dead will be followed by the living, “those who are left.”  Matthew 24:40-41 tells us that there will be “two men will be in the field; one is taken and one is left. Two women will be grinding at the mill; one is taken and one is left.”… and Luke 17:34-35 says “I tell you, in that night there will be two in one bed; one will be taken and the other left. There will be two women grinding together; one will be taken and the other left.”

So, who are the ones left behind?  Scripture tells us in the passages immediately preceding these two verses.  Matt 24:36-39 tells us it will be as the days of Noah and Luke 17:30-33 tells us it will be as the days of Lot.  Noah and Lot were the ones left and the wicked were the ones destroyed.  Matt 13:40-42 says; “Just as the weeds are collected and burned up with fire, so will it be at the end of the age.  The Son of Man will send his angels, and they will collect out of his kingdom all causes of sin and all evildoers, and they will throw them into the furnace of fire, where there will be weeping and gnashing of teeth.”  In other words, evildoers will be taken and the righteous will be the ones left to enjoy the Second Coming of the Lord when He remakes Heaven and Earth.

But what are we to make of Paul’s description that the saints who are alive will be “caught up…to meet the Lord in the air”? Paul is describing how Christians will meet the Lord in the air to escort him in a way that is analogous to the ancient custom of citizens ushering in important visitors or victors.  It was common for citizens to meet kings or military leaders outside the walls of their city and accompany them back in. This was a way for people to honor the visitor and take part in the celebration of the visitor’s coming.  We see examples of this in Acts 28:14-15, where the brethren at Rome went out of the city to meet Paul as he approached and the crowd who went out to meet Jesus on Palm Sunday and usher him into Jerusalem (see Matt. 21:1-17).  So, those who are alive at the Second Coming will be caught up in the air to meet the approaching king Jesus and escort him as he “descend[s] from heaven with a cry of command” (1 Thess. 4:16).

Historical Development of the Rapture:

The father of dispensationalism is John Nelson Darby, a Protestant Irish lawyer who left his successful practice to become an Anglican priest. Born in 1800, Darby was a contemporary of John Henry Newman, the famous leader of the Anglican Oxford movement in the 1830s. But while Newman would later become a Catholic priest and eventually a cardinal, Darby’s studies of Scripture-coupled with a disenchantment with mainstream Christian churches-led him to develop the idea of a “true church” and the apostasy of the established churches, especially the Catholic Church. He believed this true church was spiritual in character and should have no involvement in earthly affairs. He wrote that “the church is properly heavenly, in its calling and relationship with Christ, forming no part of the course of events on earth. . . . Our calling is on high. Events are on earth” (quoted by Harold Bloom in The American Religion, 22).

In 1827 Darby left the Anglican priesthood and by 1831 was among the leaders of the Plymouth Brethren, a non-denominational movement which denounced mainline Christianity. He began to teach that the true church would need to be removed from the earth in order to make way for the completion of God’s dealings with the Jews. He named this secret removal of the church the Rapture. This belief was something completely new in Christianity. No previous Christian, neither Catholic nor Protestant, had ever proposed or taught such an thing.

Darby created a timeline that divided history into “dispensations,” either six or seven in number. These indicated various ages in which God dealt with humans in distinct ways. Dispensations were “administrations” through which God tested humans and proved their utter sinfulness before him. According to Darby’s scheme we live in the dispensation of the Church, which began during the ministry of Paul. For Darby the Church forms a “parenthesis” between the dispensation of the Gentiles (before Christ) and the coming dispensation of the Kingdom. It is an era of grace in which the rejected Messiah is building up his heavenly people, the Christians. Meanwhile, God’s real issue in human history is with his earthly people, the Israelites. The Rapture will be the necessary removal of the heavenly people from the world so that God’s work with the earthly people might be finished.

Internal conflict and division marked the history of the Plymouth Brethren in England, but their belief in the Rapture and opposition to apostasy attracted followers. This influence spread to America in the mid-1800s, where the Brethren’s stance against the growing liberalism within Protestantism took immediate root. They affirmed a strict, literal reading of Scripture and taught with a strong evangelistic fervor. Darby visited the United States and Canada several times between 1862 and 1878, and his lectures and writings became quite popular. Especially important was his influence among established denominations such as Presbyterians, Baptists, and Methodists.

The weakness of doctrine in mainline Protestant churches allowed dispensationalism to become non-denominational, and it spread rapidly throughout America. A series of Bible studies developed in New York state and eventually gave rise to the Niagara Conferences, which convened between 1883 and 1897. These conferences were attended by people from a variety of denominations who came to study the Scripture, particularly biblical prophecy. American and British leaders of the loosely knit dispensational viewpoint presented their respective views about biblical prophecy, the dispensations, and the Gospel.

Dispensationalism at the end of the nineteenth century still possessed a variety of viewpoints, with many key issues still unresolved and heavily debated. Cyrus I. Scofield, a Kansas City lawyer, would change that by cementing the way dispensationalism would be understood for the next few decades. Having gained a reputation as a speaker during the Niagara Conferences, Scofield (who had no formal theological training) decided he would create a “study Bible” containing extensive notes, cross-references and commentary so that the “scientific” nature of the dispensations and biblical prophecy would be evident to the average layman.

After several year’s labor and with the assistance of a group of editors, the Scofield Reference Bible (King James Version) was published in 1909. Presented in a neatly organized and systematic manner, its dispensational premises regarding key passages of Scripture-especially books like Daniel and Revelation-entered into the mainstream of conservative American Protestantism. In the first thirty years following its publication, Scofield’s reference Bible sold about two million copies. It is still used widely today, along with the updated version, the New Scofield Reference Bible.

Scofield taught that Scripture contains passages meant for each respective time period and therefore that many passages had nothing to do with present day Christians in the “Church age.” This meant that most of Christ’s teachings, including the Sermon on the Mount, were for the future Kingdom age, not for the Church. This was another radical break from nineteen hundred years of Christian teaching. For the dispensationalist, the writings of Paul became normative for the “Church age.” (In this regard, Scofield’s teachings bear a strong resemblance to those of Marcion, the third-century heretic who insisted on an absolute break between the Old and New Testaments and who held Paul’s writings to be the central works of Christianity.)

After Scofield’s death in 1921, his pupil and colleague Lewis Sperry Chafer took up the dispensational torch. Like Scofield, Chafer had no formal theological training, a fact he took apparent pride in. He also was a popular speaker and was tireless in his efforts to spread dispensational beliefs throughout America. In 1924 he helped found what would become Dallas Theological Seminary in Texas, which, along with Moody Bible Institute in Chicago, was to be a major center of dispensational teaching.