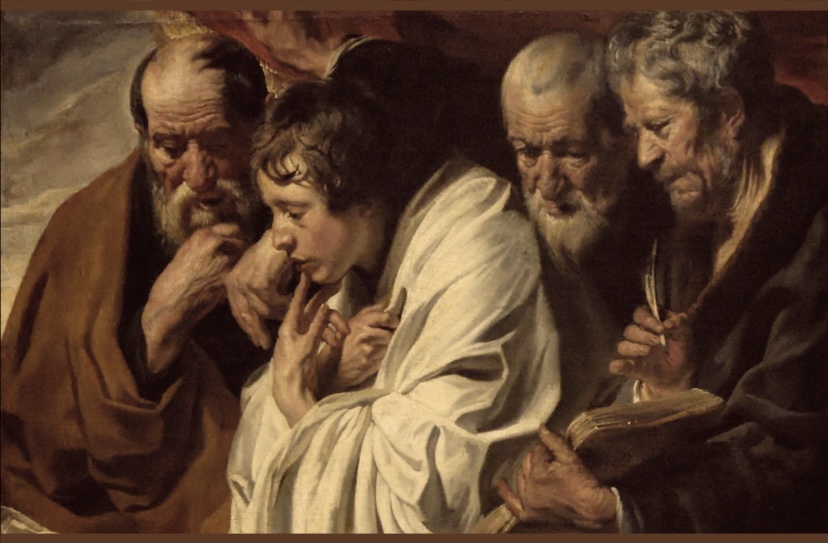 Who wrote the Gospels?

The Bible gives four accounts of Christ’s life, offering different perspectives of His teaching, crucifixion and resurrection.  These Gospels, however, were each written anonymously, giving no indication within the texts as to who the original authors were (The closest is the Gospel of John, where it implies the author was “the disciple whom Jesus loved” (John 21:24) believed to be the Apostle John).  The titles of each Gospel -which were added centuries after the Gospels were written- are the product of Tradition handed down by the earliest Christians.

Because the gospels are anonymous, skeptics often raise certain questions; how do we know for sure who wrote them?  Can we trust Tradition as a reliable source? Did the early church fathers truly know more about the gospels’ authorship than we know now?  If we can’t trust the validity of the claims that Tradition makes about who the authors were, then can we trust in the validity of the Gospels themselves?

Who wrote the Gospel of Mark?

We’ll start with Mark because most scholars agree that this was the earliest Gospel written (although Church Father accounts are unanimous in claiming Matthew was the earliest written and some modern scholars are arguing more in favor of this).  The John Mark who is believed to have been the author of the Gospel first appears in Acts 12:12 where Peter, after being freed from prison, heads to the home of “Mary the mother of John, also called Mark, where many people had gathered and were praying.”  Later, Barnabas and Saul set out on their first missionary journey, bringing along a man named “John, also called Mark” (Acts 13:5).  Mark eventually leaves the missionaries at Perga in Pamphylia, returning to Jerusalem (Acts 13:13).  When Paul later invites Barnabas on a second journey, Barnabas wants to bring John Mark with them.  Paul disagrees and the two decide to part ways (Acts 15:36–41).  Paul would later refer to Mark as his “fellow worker” (Col. 4:10) and tells Timothy, “Get Mark and bring him with you, because he is helpful to me in my ministry” (2 Timothy 4:11).

The Church Fathers claim that John Mark also knew Peter.  In 1 Peter 5:13, Peter sends greetings from “my son Mark.”  The early church father Papias claims “Mark became the interpreter of Peter.”  The early church was unanimous in claiming John Mark as the author of the Gospel of Mark as no alternatives were ever proposed.  Church Fathers claiming Mark as the author include;  Irenaeus, Tertullian, Clement of Alexandria, Origen, and Jerome. These Fathers also claim John Mark wrote the gospel using the eyewitness accounts of Peter.

Who wrote the Gospel of Matthew?

For more than a millennium, the church has claimed this to be the first Gospel written.  Most modern scholars, however, argue that Mark was the first written and that Matthew borrowed from Mark.  This, in turn, raises questions about whether the Apostle Matthew actually authored the Gospel -after all, why would an eye witness (Matthew) need to borrow from someone who was not an eye witness (Mark)?  The Early Church unanimously attributed the Gospel to Matthew, the tax collector.  They also were unanimous in claiming it to be the first Gospel written, leading some modern scholars to revisit this idea.  However, even if Matthew borrowed from Mark, it does not disprove the Apostle Matthew as the author.  Because Mark wrote his Gospel based off the reminiscences of the Apostle Peter, Matthew would have had an interest in including the perspectives of someone within Christ’s inner circle and thus would have held Mark’s Gospel in high esteem.

All three synoptic gospels list Matthew among the twelve disciples and all three record Jesus calling a tax collector to discipleship.  However, the Gospel of Matthew is the only one to refer to this tax collector as ‘Matthew’, while Mark and Luke both identify him as ‘Levi’ -a name never listed among the twelve apostles.  This deviation may be circumstantial, but some scholars argue that it could also be an indicator of Matthew’s authorship.  If Matthew and Luke both used Mark as a primary source, then it’s reasonable to assume that the authors of each would not have felt comfortable changing the name in the account unless it was one of their own names.  Historian D.A. Carson says, “it is significant that it is more self-deprecating than Luke’s account, which says that Matthew ‘left everything’ and followed Jesus . . .”  While it is possible that these are two separate men, most scholars believe Matthew was known by two names.

Being a tax collector, Matthew would have been an organized individual and the Gospel of Matthew is neatly organized.  Jesus has five prominent sermons in Matthew, and each ends with some variation of the same transition: “When Jesus had finished saying these things . . .” (Matthew 7:28; 11:1; 13:53; 19:1; 26:1). In Matthew 13, the author gives us seven parables in a row. And in Matthew 23 we read seven woes to the pharisees.  The Gospel of Matthew also focuses more on monetary situations than the other Gospels.  The parable of the talents is only found in Matthew. Gold and silver are mentioned 28 times in the Gospel of Matthew, but they’re only mentioned once in Mark and four times in Luke. The author also uses specific money-related terms the other gospels don’t mention, such as the two-drachma temple tax in 17:24 and the Greek word stater in 17:25.  In the Lord’s Prayer, the author of Matthew says “And forgive us our debts, as we also have forgiven our debtors” (Matthew 6:12), whereas the author of Luke says, “Forgive us our sins, for we also forgive everyone who sins against us” (Luke 11:4).

According to Eusebius, the second-century church father Papias said “Matthew compiled the logia (‘sayings’) in the Hebrew language and everyone translated them as best they could.”  Matthew is one of the less important of the disciples, as he’s hardly mentioned in the entire New Testament.  Matthew’s lack of prominence in the New Testament would suggest that the early church had to have had good reason to attribute the gospel to him.

Who wrote the Gospel of Luke?

The early church credits the Gospel of Luke to Paul’s companion, Luke.  Luke is mentioned throughout Paul’s letters (Colossians 4:7–17, Philemon 24, and 2 Timothy 4:11), where we learn that he was a doctor.

The author of Luke states that he is not an eyewitness to the ministry of Jesus; “Many have undertaken to draw up an account of the things that have been fulfilled among us, just as they were handed down to us by those who from the first were eyewitnesses and servants of the word. With this in mind, since I myself have carefully investigated everything from the beginning, I too decided to write an orderly account for you, most excellent Theophilus, so that you may know the certainty of the things you have been taught.” (Luke 1:1–4)

Church tradition tells us that Luke was a converted Gentile, which would explain why the author takes such an interest in how Gentiles respond to the gospel. Given his familiarity with the Hebrew Scriptures, however, some scholars speculate that Luke may have been a “God-fearer”—a Gentile who worshiped the God of Israel.

For three main reasons, almost all scholars believe the Gospel of Luke was written by the same person who wrote Acts:

Acts strongly reinforces the author’s close connection to Paul, suggesting that he went with Paul on his second and third missionary journeys, and eventually accompanied him to Rome (Acts 16:10–17; 20:5–21; 21:1–18; 27:1–28:16).  Luke and Acts both use specific medical terminology, which would appear to support the claim that Luke the physician is the author of both. In Luke 13:11-13, Jesus heals a crippled woman: “. . . and a woman was there who had been crippled by a spirit for eighteen years. She was bent over and could not straighten up at all. When Jesus saw her, he called her forward and said to her, ‘Woman, you are set free from your infirmity.’ Then he put his hands on her, and immediately she straightened up and praised God.”  The Greek words Luke uses both to describe her condition (sugkuptousa) and the exact manner of Jesus’ healing (apolelusai, anorthothe) are medical terms.  In Luke 14:1–4, Jesus heals a man with dropsy:  “One Sabbath, when Jesus went to eat in the house of a prominent Pharisee, he was being carefully watched. There in front of him was a man suffering from abnormal swelling of his body. Jesus asked the Pharisees and experts in the law, ‘Is it lawful to heal on the Sabbath or not?’ But they remained silent. So taking hold of the man, he healed him and sent him on his way.”  Luke uses a word to describe the man in this passage that’s found nowhere else in the Bible: hudropikos. While this passage is the only place this word appears in the Bible, it’s a precise medical term frequently used in other texts, such as the works of the Greek physician, Hippocrates.  The use of medically-accurate phrases and descriptions continues in Acts, such as Acts 28:8–9, where the writer uses puretois kai dusenterio sunechomenon to describe a man’s exact medical condition (“suffering from fever and dysentery”).

Early Church Fathers, Irenaeus, Clement of Alexandria, Tertullian, Origen, and others all list Luke as the author.

Who wrote the Gospel of John?

“The disciple whom Jesus loved” is traditionally believed to be the apostle John.  The writer of John claims to be an eyewitness to the ministry of Jesus, and the gospel contains numerous details indicating an eyewitness account;

The author also appears to be Jewish, recording numerous details about Jewish ceremonies and using Jewish festivals to mark when events occurred;

The writer also introduces Aramaic words like Rabbi, Rabboni, Messias, and Kēphas.  The Dead Sea Scrolls support the themes and imagery John uses, (such as light vs. darkness, and the children of God vs. the children of Satan) as emerging from a Jewish context.

Some scholars have proposed alternative possibilities for “the disciple whom Jesus loved.” First proposed is Lazarus, who first appears in John 11:1, and two chapters later, the writer identifies someone as the disciple whom Jesus loved (John 13:23). The gospel also explicitly says Jesus loves Lazarus:  “So the sisters sent word to Jesus, ‘Lord, the one you love is sick.’” —John 11:3.  A second proposal is Thomas.  The disciple Jesus loved saw the spear pierce Jesus’ side (John 19:35), and Thomas specifically asks to see Jesus’ side when he’s resurrected (John 20:25). This encounter comes just before the gospel’s purpose statement.  Despite alternative theories about the disciple whom Jesus loved, most evidence still points to the apostle John. The early church father Irenaeus wrote, “afterwards, John, the disciple of the Lord, who also had leaned upon His breast, did himself publish a gospel during his residence at Ephesus in Asia.” Irenaeus lived in the second century, and claimed to receive this information from John’s disciple, Polycarp.

The text seems to point to John, too. The disciple whom Jesus loved was clearly close to Peter:

This close relationship supports the likelihood that this disciple was part of Jesus’ “inner circle” (Peter, James, or John). Since James is martyred early (Acts 12:1-5), and John is never mentioned by name in the whole book (which for anyone else would be a mistake), John is believed to be the most likely author.