John Climacus, also known as John of the Ladder (579-649 A.D.), was a 6th–7th-century Christian monk at the monastery on Mount Sinai.  John came to the Vatos Monastery at Mount Sinai, now Saint Catherine’s Monastery, and became a novice when he was about 16 years old. He was taught about the spiritual life by the elder monk Martyrius. After the death of Martyrius, John, wishing to practice greater asceticism, withdrew to a hermitage at the foot of the mountain. In this isolation he lived for some twenty years, constantly studying the lives of the saints and thus becoming one of the most learned Church Fathers.  Of John’s literary output we know only the Κλῖμαξ (Latin: Scala Paradisi) or The Ladder of Divine Ascent, composed in the early seventh century.

The Ladder describes how to raise one’s soul and body to God through the acquisition of ascetic virtues. Climacus uses the analogy of Jacob’s Ladder as the framework for his spiritual teaching. Each chapter is referred to as a “step”, and deals with a separate spiritual subject. There are thirty Steps of the ladder, which correspond to the age of Jesus at his baptism and the beginning of his earthly ministry. Within the general framework of a ‘ladder’, Climacus’ book falls into three sections. The first seven Steps concern general virtues necessary for the ascetic life, while the next nineteen (Steps 8–26) give instruction on overcoming vices and building their corresponding virtues. The final four Steps concern the higher virtues toward which the ascetic life aims. The final rung of the ladder—beyond prayer (προσευχή), stillness (ἡσυχία), and even dispassion (ἀπάθεια)—is love (ἀγάπη).  Originally written simply for the monks of a neighboring monastery, the Ladder swiftly became one of the most widely read and much-beloved books of Byzantine spirituality. This book is one of the most widely read among Orthodox Christians, especially during the season of Great Lent which immediately precedes Pascha (Easter). It is often read in the trapeza (refectory) in Orthodox monasteries, and in some places it is read in church as part of the Daily Office on Lenten weekdays, being prescribed in the Triodion.  An icon known by the same title, Ladder of Divine Ascent, depicts a ladder extending from earth to heaven.  Several monks are depicted climbing a ladder; at the top is Jesus, prepared to receive them into Heaven. Also shown are angels helping the climbers, and demons attempting to shoot with arrows or drag down the climbers, no matter how high up the ladder they may be. Most versions of the icon show at least one person falling. Often, in the lower right corner John Climacus himself is shown, gesturing towards the ladder, with rows of monastics behind him. 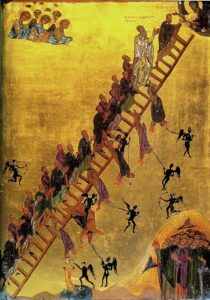 To the Pastor, (a short guide for abbots)

He is properly a pastor who brings the lost rational sheep back to life through guilelessness, through his own eagerness, and through prayer, and who is able to set them straight again. He is a pilot who, having received noetic strength from God and from his own hardships, is able to draw the ship back, not only from the triple wave, but even from the abyss itself. He is a doctor who has acquired an unsickened body and soul, and is not lacking even a single plaster for others. He is truly a teacher who, provided with the noetic tablet of the knowledge of God by a finger, or rather, by the energy of illumination from Him, through himself, and not lacking other books; it is unseemly for teachers to teach from copies and for painters to be marked by changes; you who educate those below, learn from the heights above; and be educated by something other than the sensible form; do not forget the One saying that he is teaching doctrine not from men nor through men (Gal 1:1). For He did not bring forth the things below to ever serve the things of earth; the good pilot saves the ship; and the good shepherd gives life and heals the sickened sheep. However many sheep follow the shepherd, advancing without pausing, so much will he have to give an account of them to the housekeeper. Let the shepherd be stoned by word and the sheep are departing through sluggishness and gluttony; for this is the proof of the good shepherd, whensoever the sheep begin to slumber in soul because of the flame of the furnace, or rather the body, then the shepherd, looking towards heaven, keeps greater watch over them. For, in time, they become accustomed to this heat, many being eaten by wolves; but if those among the sheep who are outside, having beheld the type, turn the head of their soul, in time, from the fire below the earth, then we have the One saying, A crushed and humbled heart God will not spurn (Ps 51:17); the passions of darkness and night overtaking the flock, order the dog to howl immovably towards God, in the nightly watch; nothing distracting your mind, you will think of the destruction of the wild beasts.

Our good Lord also made this a peculiarity of nature, that the sick, seeing the doctor, would rejoice; equally so, if he is lacking nothing; and you, O wondrous one, acquire plaster, dessicants, eye-salves, drinks, sponges, antiemetics, blood-letters, cauterizers, ointments, sleeping pills, knife, bands. But if we turn away from these, how will be display knowledge? In no way at all; for rewards are given, not for words, but for deeds. Plaster is the healing of visible passions, rather, those of the body. A dose is the healing of interior passions, and the emptying of unseen filth. A dessicant is stinging to dishonorable things, and curing to a rotting of opinion. Eye-salve is a cleansing of the eye of the noetic soul, troubled by the turbid temper. A drink[1] is an astringent rebuke, and is curing, after a little while. A blood-letter is a brief removal of unseen illnesses;[2] a blood-letter is, properly, an intensive and abrupt assault for the salvation of the sick. A sponge is, after blood-letting or surgery, a service or refreshment for the sick one, through the doctor’s soft and gentle words and tender touches. A cauterizer is a boundary and price for repentance, giving for a time out of love for mankind; an ointment is an exhortation laid upon the sick one after the cauterizer, either through a word, or through a small consolation. A sleeping pill is for receiving the burden of obedience, and for bestowing on him, through the command, rest and sleepless sleep and holy blindness, to not see his own beauties. Bands are for making firm and for tightening those drawn to death and puffed up by vainglory and by obstinacy. And, last of all, the knife is a boundary and condemnation to cut off limbs psychically put to death and rotted, so that they might not spread their own mange to the rest. Blessed antiemetics are the passionlessness of doctors and leaders; for those who are not nauseated in all treatments of illness act without hesitation; and they are able to resurrect every deadened soul. And this has been one of the prayers of the leader himself, to sympathize and have compassion on all, according to their worth; to not, like Jacob, injure his beloved and his companions;[3] for he was wont to suffer this, since he had not yet perfectly acquired the denuded senses of the soul, to distinguish the good, the middling, and the evil.

Great is the shame of the leader asked to give something to his subordinate which he has not yet acquired. As those who have seen the king’s face, and have been given his friendship, are therefore able to let all his ministers, and those ignorant of him or his enemies, whomever they so will, to enjoy his glory, so also should you think about the holy things: friends reverence and obey the most intimate friends. And they are equally constrained by them; evil is it for noetic friends to acquire friends; for no one thus unites us to virtue. One of the friends of God has described to me how always, but especially on the yearly feasts and those of the Lord, God exchanges gifts with those serving Him.

Perfectly ought the doctor to strip off these passions, so that, at the proper time, he might be able to explain some, then others, and especially wrath. For unless he thrust them away to the utmost, he will not be able to plunge into them passionlessly. I saw a horse, still little, serving without training, who, led by a bridle, and bearing it silently, suddenly overthrew his lord, he having relaxed the bridle a little; the present problem generally comes about as result of two demons; those willing to seek for them, let them seek laboriously.[4]