Pope Callixtus I was the bishop of Rome from 218 to his death c. 222 or 223.  In 199 A.D., Callixtus was ordained a deacon by Pope Zephyrinus and was appointed superintendent of the Christian cemetery on the Appian Way, which is to this day called the Catacombs of St. Callixtus.  The Catacombs became the burial-ground of many popes, known as the Crypt of Popes, and was the first land property owned by the Church.  The Catacomb and Crypt were rediscovered in 1854 by the pioneering Italian archaeologist Giovanni Battista de Rossi.  At its peak, the 37-acre site held the remains of 16 popes and 50 martyrs. Nine of those popes were buried in the Crypt of the Popes, to which Pope Damasus I built a staircase in the 4th century. Among the discovered Greek language inscriptions are those associated with: Pope Pontian, Pope Anterus, Pope Fabian, Pope Lucius I, and Pope Eutychian. A more lengthy inscription to Pope Sixtus II by Furius Dionisius Filocalus has also been discovered.  In another region, there is a tomb attributed to Pope Cornelius, bearing the inscription “CORNELIVS MARTYR“.

In 217, when Callixtus succeeded Pope Zephyrinus as Bishop of Rome, and he started to admit into the Church converts from sects or schisms who had not done penance.  Pope Callixtus, building on the fact that Christ gave the Church the power to forgive sins, began extending absolution to include grave sins such as murder and adultery.  Hippolytus of Rome, while affirming that Christ gave the Church the power of absolution, found Callixtus’s policy of extending forgiveness of sins to cover sexual transgressions shockingly lax.  Hippolytus, putting himself in opposition to Callixtus, was elected as a rival bishop of Rome and became the first antipope.  Callixtus I’s contemporaries and enemies, Tertullian and Hippolytus of Rome, both wrote narratives of the Pope in attempts to discredit him, but their merits are questionable given the situational context.  In response to Callixtus’ policies, Tertullian, who had previously always upheld Papal authority, left the Catholic Church to join the Montanists.  Callixtus is specifically mentioned in Tertullian’s work On Modesty and Hippolytus’ work A Refutation of All Heresies.

Pope Callixtus was martyred around 223 A.D.  Tradition states that he was thrown down the well that resides in the 8th-century church Chiesa di San Callisto, which was built originally as a shrine on the site of his martyrdom, which is attested in the 4th-century Depositio martyrum and so is likely to be historical.

Images of the Catocombs of St. Callixtus: 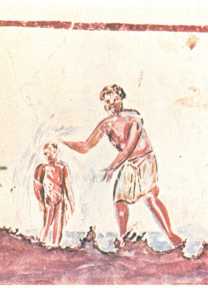 Fresco in the Catacombs of San Calisto in Rome, named for Calixtus I, who was in charge of the cemetery during the reign of Pope Zephyrinus.  The image depicts an adult baptizing a child. 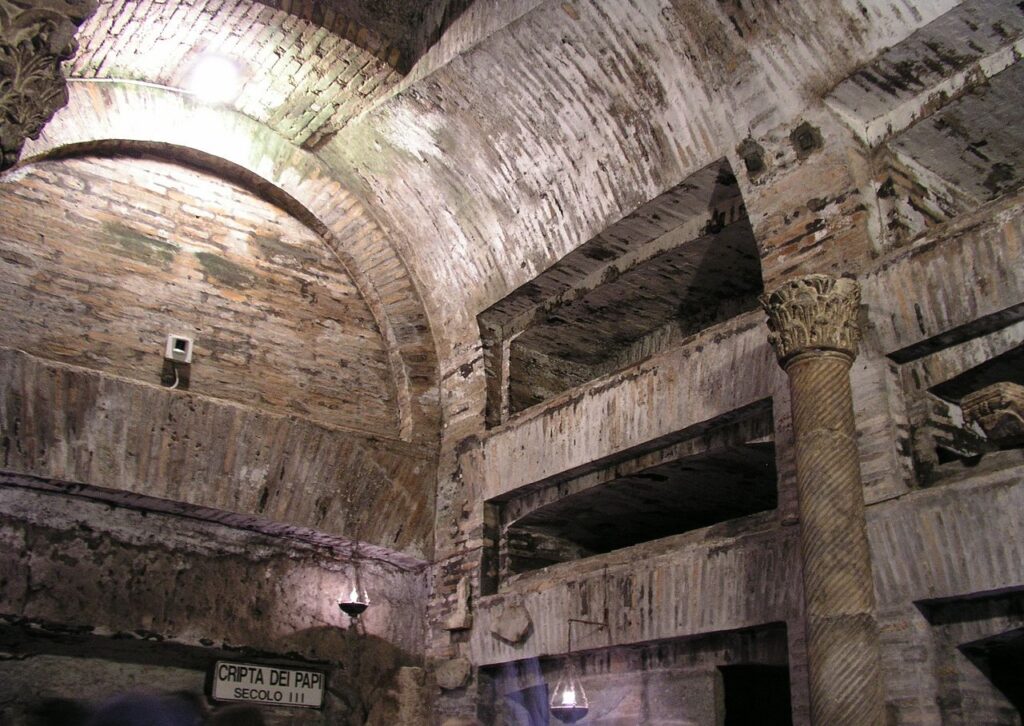 -On Modesty (by Tertullian of Carthage)

I hear that there has even been an edict set forth, and a peremptory one too. The Pontifex Maximus -that is, the bishop of bishops -issues an edict: “I remit, to such as have discharged (the requirements of) repentance, the sins both of adultery and of fornication.”

There are some sins of daily committal, to which we all are liable: for who will be free from the accident of either being angry unjustly, and retaining his anger beyond sunset; or else even using manual violence or else carelessly speaking evil; or else rashly swearing; or else forfeiting his plighted word or else lying, from bashfulness or “necessity”? In businesses, in official duties, in trade, in food, in sight, in hearing, by how great temptations are we plied! So that, if there were no pardon for such sins as these, salvation would be unattainable to any. Of these, then, there will be pardon, through the successful Suppliant of the Father, Christ.

But there are, too, the contraries of these; as the graver and destructive ones, such as are incapable of pardon-murder, idolatry, fraud, apostasy, blasphemy; (and), of course, too, adultery and fornication; and if there be any other “violation of the temple of God.” For these Christ will no more be the successful Head: these will not at all be incurred by one who has been born of God, who will cease to be the son of God if he do incur them.

Refutation of All Heresies, 9. 12 (by Hippolytus of Rome)

The impostor Callistus, having ventured on such opinions, established a school of theology in antagonism to the Church, adopting the foregoing system of instruction. And he first invented the device of conniving with men in regard of their indulgence in sensual pleasures, saying that all had their sins forgiven by himself. For he who is in the habit of attending the congregation of any one else, and is called a Christian, should he commit any transgression; the sin, they say, is not reckoned unto him, provided only he hurries off and attaches himself to the school of Callistus. And many persons were gratified with his regulation, as being stricken in conscience, and at the same time having been rejected by numerous sects; while also some of them, in accordance with our condemnatory sentence, had been by us forcibly ejected from the Church. Now such disciples as these passed over to these followers of Callistus, and served to crowd his school. This one propounded the opinion, that, if a bishop was guilty of any sin, if even a sin unto death, he ought not to be deposed. About the time of this man, bishops, priests, and deacons, who had been twice married, and thrice married, began to be allowed to retain their place among the clergy. If also, however, any one who is in holy orders should become married, Callistus permitted such a one to continue in holy orders as if he had not sinned. And in justification, he alleges that what has been spoken by the Apostle has been declared in reference to this person: “Who art thou that judgest another man’s servant?” But he asserted that likewise the parable of the tares is uttered in reference to this one: “Let the tares grow along with the wheat;” or, in other words, let those who in the Church are guilty of sin remain in it. But also he affirmed that the ark of Noah was made for a symbol of the Church, in which were both dogs, and wolves, and ravens, and all things clean and unclean; and so he alleges that the case should stand in like manner with the Church. And as many parts of Scripture bearing on this view of the subject as he could collect, he so interpreted