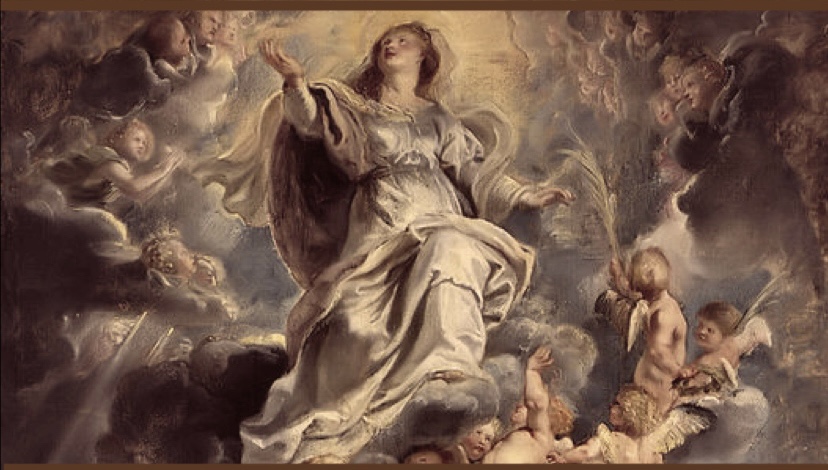 The Assumption of Mary

The Assumption of Mary is a belief held by the Catholic Church, Eastern Orthodox Churches, Oriental Orthodoxy,  and Church of the East, -known as the Dormition of the Theotokos in Eastern Churches.  Assumption should not be confused with Ascension.  To ascend into heaven is to enter heaven by one’s own power, which has only been done by Jesus Christ, as John 3:13 says; “no one has ever ascended into heaven except the one who came from heaven–the Son of Man”.  To be assumed, on the other hand, is to be taken into heaven, both body and soul, as by a direct act of God.  This would be similar to the Protestant idea of the Rapture.

There is Scriptural evidence for the possibility of a bodily assumption: Enoch “walked with God; then he was no more, for God took him away” (Gen. 5:24).  Sirach 44:16 and 49:14 make it clear that he was taken up from the earth, and Hebrews 11:5 adds “so that he should not see death.” …Elijah “went up by a whirlwind into heaven.” (2 Kings 2:11) and 1 Maccabees 2:58 adds “it was because of great zeal for the Law that he was taken up into heaven. ” …Paul admits the possibility of his own bodily assumption: “I know a man in Christ who fourteen years ago was caught up to the third heaven. Whether it was in the body or out of the body I do not know–God knows. And I know that this man–whether in the body or apart from the body I do not know, but God knows–was caught up to Paradise” (2 Cor. 12:2-4a).

Catholics believe that Mary entered heaven in a similar manner, though they generally believe that she died before being assumed.  Some Protestants will point to 1 Cor. 15:22-23 as precluding the possibility of Mary’s bodily assumption, but this verse doesn’t invalidate belief in the Assumption because the Redemption was accomplished with Christ’s death, and so the final dispensation of grace, the “end times” (1 John 2:18), was initiated. The early resurrection of the saints in Matthew 27:52-53 anticipated the rising of those who die in faith, all of who will be assumed one day to receive their glorified bodies.  The Scriptures also promise that those who suffer with Christ will be glorified with him (Rom. 8:17), so it is fitting that she whose heart was pierced through her Son’s suffering would receive her glorification in a unique manner. Jesus, being perfect, would have obeyed the commandment to honor his mother. The Hebrew word for “honor” does not imply mere courtesy, but the bestowal of honor and glory. By preserving Mary’s body from corruption, Jesus fulfills the command to honor his mother in a way that only a divine Son could.

Another reason for Mary’s Assumption is her role as the New Ark of the Covenant.  The holiest object for the people of Israel was the Ark of the Covenant, because it contained the bread from heaven, the staff of Aaron, and the tablets of the law. It was laden in and out with gold and could only be approached by sanctified priests. One unfortunate soul dared to touch it, and despite his good intentions, it cost him his life (2 Sam. 6:6-7). God’s glory overshadowed this holy Ark, and Psalm 132:8 says of it, “Arise, O Lord, into thy resting place; thou and the ark which thou hast sanctified.”

In the book of Revelation we read, “Then God’s temple in heaven was opened, and the ark of his covenant was seen within his temple” (Rev. 11:19). “And a great portent appeared in heaven, a woman clothed with the sun, with the moon under her feet, and on her head a crown of twelve stars; . . . she brought forth a male child, one who is to rule all the nations with a rod of iron” (Rev. 12:1,5). The arbitrary break here between chapters, done long after the Bible was written, makes it easy to overlook how John mentions the mother of the Messiah in conjunction with the Ark of the Covenant.

Another common objection is that if God had worked a big miracle in Mary’s life, shouldn’t it have somehow ended up in the Bible?  However, Scripture does not record everything that happened.  The martyrdom of Peter and Paul in Rome is not recorded, and yet history overwhelmingly attests to this.  The fates of most of the Apostles are never mentioned, yet we know that they were given the authority to perform many miracles in Jesus’ name (Mark 16:17-18), even performing greater miracles than the ones Jesus himself performed (John 14:12).  Not even all of Jesus’ own miracles are recorded in the Bible (John 20:30).

Archaeology has revealed two tombs of Mary, one in Jerusalem and one in Ephesus. The fact that Mary lived in both places explains the two tombs. But what is inexplicable apart from the Assumption is the fact that there is no body in either tomb. And there are no relics. Anyone who peruses early Church history knows that Christian belief in the communion of saints and the sanctity of the body—in radical contrast to the Gnostic disdain for “the flesh”—led early Christians to seek out with the greatest fervor relics from the bodies of great saints.The early Church prized the relics of early Christians, as can be seen by reading The Martyrdom of Polycarp. However, no one claimed to have Mary’s remains, which would have been prized above all others. There is no historical reference to the relics of Mary, the corruption of Mary, or the place where her body lies.

the Transitus Mariae (Passage of Mary) literature, have texts in Greek, Latin, Syriac, Coptic (Egyptian), and Arabic, there would seem to be little doubt that the Assumption was a catholic (i.e. universal) belief among early Christians. the belief was so widespread in the fifth century that it is hard not to conclude that it must have originated at a much earlier date. Many scholars place the Syriac fragments of the Transitus stories as far back as the third century, and noted Mariologist Michael O’Carroll adds, “The whole story will eventually be placed earlier, probably in the second century–possibly, if research can be linked with archaeological findings on Mary’s tomb in Gethsemani, in the first [century].”(Michael O’Carrol C.S.Sp., Theotokos: A Theological Encyclopedia of the Blessed Virgin Mary (Wilmington: Glazier, 1982) s.v. “Assumption Apocrypha,” 59.) The Byzantine Emperor Mauritius (582-602) established the celebration of the Dormition of the Blessed Virgin Mary on August 15 for the Eastern Church.
The Assumption of Mary was celebrated in the West under Pope Sergius I and Pope Leo IV confirmed the feast as official in the 8th century.

“the tombs broke open and the bodies of many holy people who had died were raised to life. They came out of the tombs, and after Jesus’ resurrection they went into the holy city and appeared to many people.”

“Under cover of your motherly heart we flee for refuge, Mother of God [Theotokos]; do not brush aside our entreaties in our distress, but rescue us from danger, you, peerlessly holy and blessed.”-Sub Tuum Prayer, written in 250 A.D.

”Like the bodies of the saints, however, she has been held in honor for her character and understanding. And if I should say anything more in her praise, she is like Elijah, who was virgin from his mother’s womb, always remained so, and was taken up, but has not seen death” –Panarion 79, written 350 A.D.

“Then the Savior spake, saying: Arise, Peter, and take the body of Mary and bear it unto the right-hand side of the city [Jerusalem] toward the East, and thou wilt find there a new sepulchre wherein ye shall place it, and wait till I come unto you….[T]he apostles carrying Mary came into the place of the valley of Jehosha-phat which the Lord had showed them and laid her in a new tomb and shut the sepulchre.”-the Assumption

“For Christ took His immaculate flesh from the immaculate flesh of Mary, and if He had prepared a place in heaven for the Apostles, how much more for His mother; if Enoch had been translated and Elijah had gone to heaven, how much more Mary, who like the moon in the midst of the stars shines forth and excels among the prophets and Apostles? For even though her God-bearing body tasted death, it did not undergo corruption, but was preserved incorrupt and undefiled and taken up into heaven with its pure and spotless soul.” –the Assumption of Mary

“St. Juvenal, Bishop of Jerusalem, at the Council of Chalcedon (451), made known to the Emperor Marcian and Pulcheria, who wished to possess the body of the Mother of God, that Mary died in the presence of all the Apostles, but that her tomb, when opened upon the request of St. Thomas, was found empty; wherefrom the Apostles concluded that the body was taken up to heaven.”

“For this reason we believe that the Virgin Mary, Begetter of God, the most pure bed and temple of the Holy Spirit, that is, her most holy body, was carried to heaven by angels.” –1539 polemical treatise against idolatry (The Thousand Faces of the Virgin Mary (1996), George H. Tavard, p. 109