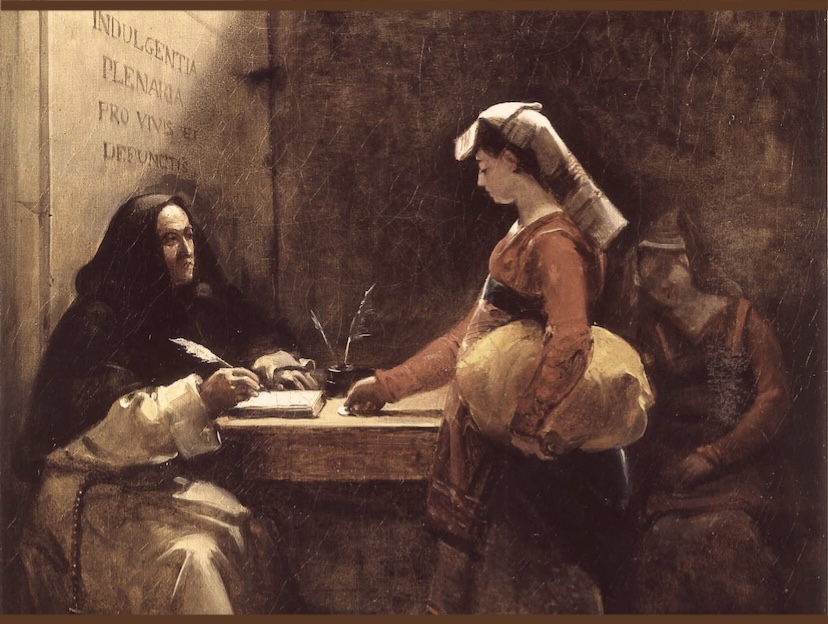 An indulgence, as defined by Pope Paul VI, is “a remission before God of the temporal punishment due to sins whose guilt has already been forgiven, which the faithful Christian who is duly disposed gains under certain defined conditions through the Church’s help when, as a minister of redemption, she dispenses and applies with authority the treasury of the satisfactions won by Christ and the saints” (Indulgentiarum Doctrina 1).  The practical use of indulgences is further explained in the Catechism of the Catholic Church; “An indulgence is obtained through the Church who, by virtue of the power of binding and loosing granted her by Christ Jesus, intervenes in favor of individual Christians and opens for them the treasury of the merits of Christ and the saints to obtain from the Father of mercies the remission of the temporal punishment due for their sins.” The Church does this not just to aid Christians, “but also to spur them to works of devotion, penance, and charity” (CCC 1478).

Indulgences do not apply to eternal punishments since indulgences remit only temporal penalties; ie they cannot remit the eternal penalty of hell. An indulgence is not the purchase of a pardon which secures the buyer’s salvation or releases another soul from Purgatory. Neither does the practice of Indulgences imply that one is purchasing forgiveness since the definition of  an indulgence presupposes that forgiveness has already taken place: “An indulgence is a remission before God of the temporal punishment due to sins whose guilt has already been forgiven” (Indulgentarium Doctrina 1).  Indulgences also do not apply to future sin; The Catholic Encyclopedia notes, “[An indulgence] is not a permission to commit sin, nor a pardon of future sin; neither could be granted by any power.”   It is also a misconception that one can buy an indulgence; The Council of Trent instituted severe reforms in the practice of granting indulgences, and, because of prior abuses, “in 1567 Pope Pius V canceled all grants of indulgences involving any fees or other financial transactions” (Catholic Encyclopedia).  In fact, one never could “buy” indulgences. The financial scandal surrounding indulgences that gave Martin Luther an excuse for his heterodoxy, involved indulgences in which the giving of alms to some charitable fund or foundation was used as the occasion to grant the indulgence. There was no outright selling of indulgences (even if certain individuals ignorantly presented as such). The Catholic Encyclopedia states: “Among the good works which might be encouraged by being made the condition of an indulgence, almsgiving would naturally hold a conspicuous place.  To give money to God or to the poor is a praiseworthy act, and, when it is done from right motives, it will surely not go unrewarded.”  Indulgences were not invented as a means for the Church to make money.  Indulgences developed from reflection on the sacrament of reconciliation. They are a way of shortening the penance of sacramental discipline and were in use centuries before money-related problems appeared.

To understand the theology behind indulgences, one must start with Christ’s Atonement on the cross, which paid the price for our eternal punishment so that, when we repent, God removes our guilt (Isa. 1:18) and any eternal punishment (Rom. 5:9).  However, Christ’s Atonement did not remove all temporal penalties resulting from sin.  This should be made obvious by simply looking at our justice system.  If someone commits murder -even if they plead guilty- they would still incur prison time.  If someone commits theft and later repents, they are still expected to return the item or at least pay it back in some way.  Scripture itself indicates that temporal penalties are real and have been in existence since the fall of man: “To the woman he said, ‘I will greatly multiply your pain in childbearing; in pain you shall bring forth children” (Gen. 3:16).  Physical death itself is a temporal punishment; (Gen. 3:22-24; Rom. 5:12).  Neither of these temporal punishments were alleviated by Christ’s death on the cross.

Even after one repents and is forgiven, temporal punishments may still be put in place, as shown in 2 Samuel 12; “Then David said to Nathan, ‘I have sinned against the Lord.’ Nathan answered David: ‘The Lord on his part has forgiven your sin; you shall not die. But since you have utterly spurned the Lord by this deed, the child born to you must surely die’” (2 Sam. 12:13-14). God forgave David but David still had to suffer the loss of his son as well as other temporal punishments (2 Sam. 12:7-12). In the Sacrament of Baptism not only is the guilt of sin remitted, but also all the penalties attached to sin. In the Sacrament of Penance the guilt of sin is removed, and with it the eternal punishment due to mortal sin; but there still remains the temporal punishment which may be fulfilled either in the present life or  in Purgatory.  An indulgence offers the penitent sinner the means of fulfilling this debt during his life on earth.  The belief that God can lessen temporal punishments through acts of penance is central to the idea of indulgences.  Scripture tells us God gave the authority to forgive sins “to men” (Matt. 9:8) and to Christ’s ministers in particular. Jesus told them, “As the Father has sent me, even so I send you. . . . Receive the Holy Spirit. If you forgive the sins of any, they are forgiven; if you retain the sins of any, they are retained” (John 20:21-23).  Christ also promised his Church the power to bind and loose on earth, saying, “Truly, I say to you, whatever you bind on earth shall be bound in heaven, and whatever you loose on earth shall be loosed in heaven” (Matt. 18:18).  The power of binding and loosing also extends to the Church’s ability to impose discipline, and Church discipline involves administering and removing temporal penalties.  From the beginning of the Church, acts of penance were assigned as part of the sacrament because the Church recognized that Christians must deal with temporal penalties, such as God’s discipline and the need to compensate those whom our sins have injured.  In the early Church, penances were sometimes severe. But the Church recognized that repentant sinners could shorten their penances by pleasing God through pious or charitable acts that expressed sorrow and a desire to make up for one’s sin.  The Church also recognized the duration of temporal punishments could be lessened through the merits of other persons who had pleased God.  This practice can be traced back to the early Roman persecutions when those performing penance would seek out holy Christians who had been imprisoned due to persecution and ask them to intercede on their behalf and ask the Church to lessen their penance.

In other words, even after receiving absolution from the guilt of sin in the Sacrament of Penance, the penitent may still face a temporal penalty because sin is only fully pardoned and its effects entirely obliterated when a complete reparation, or “satisfaction” of its effects has been made.  This satisfaction, called “penance”, is imposed by the priest when he gives absolution after Confession.  Only Christ can make reparation or satisfaction when it comes to the eternal effects of our sins because we are finite creatures and therefore are completely incapable of making an infinite satisfaction (and because everything we have was given to us by God).  This does not mean, however, that we can’t make amends or reparation for the temporal effects of our sins.  For example, one can make partial amends (expiation) for their sins by returning a stolen item in the case of theft or by making amends with their spouse after an argument.  The Church’s ability to impose and release penance can be found in Scripture when St. Paul deals with the case of the incestuous man of Corinth (2 Corinthians 2:5-10). The sinner had been excluded by St. Paul’s order from the company of the faithful, but repented, and so Paul judges that to such a one “this rebuke is sufficient that is given by many”, and adds: “To whom you have pardoned any thing, I also. For what I have pardoned, if I have pardoned any thing, for your sakes have I done it in the person of Christ.” St. Paul had imposed excommunication, but now releases the penitent from this punishment by an exercise of his authority “in the person of Christ.”

An indulgence presupposes the effects obtained by confession, contrition, and penance. It is different from penitential works such as prayer, fasting, and alms-giving that one may undertake because these are personal and earn merit by the one performing them. Merit is personal, and therefore it cannot be transferred; but the satisfaction achieved by performing them can be applied to others, just as Christ’s satisfaction is applied to our eternal punishment.  St. Paul demonstrates this in Colossians 1:24 when he says; “I am now rejoicing in my sufferings for your sake, and in my flesh I am completing what is lacking in Christ’s afflictions for the sake of his body, that is, the church.”  Since the satisfaction of Christ is infinite, it constitutes an inexhaustible fund which is more than sufficient to cover the indebtedness contracted by sin, but in addition to this are the virtues, penances, and sufferings of the saints. These are added to the treasury of the Church as a secondary deposit, not independent of, but rather acquired through the merits of Christ.  An indulgence, therefore, is the merits of Christ and of the saints within the “Treasury” of the Church being applied to the penitent.

This also includes the merits of the living being applied to those who died in God’s grace, but who are still in need of purification (see Purgatory).  From the earliest times, Christians have recognized the value and validity of praying for the dead.  This can be seen in the many inscriptions within early Christian catacombs.  This also has Biblical support. In the Old Testament, Judah Maccabee finds the bodies of soldiers who died wearing superstitious amulets during one of the Lord’s battles. Judah and his men “turned to prayer, beseeching that the sin which had been committed might be wholly blotted out” (2 Macc. 12:42). Judah also “took up a collection, man by man, to the amount of two thousand drachmas of silver and sent it to Jerusalem to provide for a sin offering. In doing this . . . he made atonement for the dead, that they might be delivered from their sin” (2 Macc. 12:43, 46).

“I am now rejoicing in my sufferings for your sake, and in my flesh I am completing what is lacking in Christ’s afflictions for the sake of his body, that is, the church.”

““Which peace some, not having it in the Church, are accustomed to beg from the martyrs in prison; and therefore you should possess and cherish and preserve it in you that so you perchance may be able to grant it to others.” –Ad martyres, c. i, P.L., I, 621

““Those who have received a libellus from the martyrs and with their help can, before the Lord, get relief in their sins, let such, if they be ill and in danger, after confession and the imposition of your hands, depart unto the Lord with the peace promised them by the martyrs”-Ep. xiii, P.L., IV, 261

“All the saints intended that whatever they did or suffered for God‘s sake should be profitable not only to themselves but to the whole Church.”-Quodlib., II, q. vii art. 16

“one cannot go through the archives of any hospital without finding numerous letters of indulgence”. –Gesch. d. Christliche Liebesthatigkeit, Stuttgart, 1884, II, 244

“The basic idea of expiation has to do with reparation for a wrong, the satisfaction of the demands of justice through paying a penalty.”