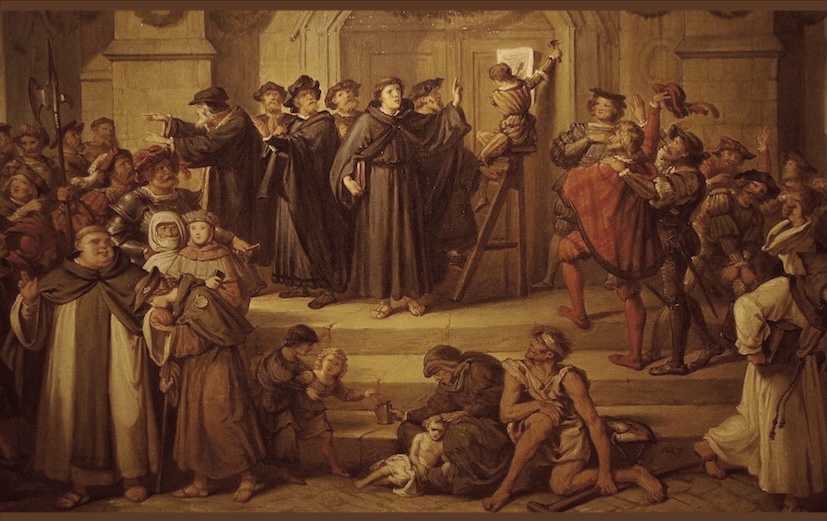 Contrary to popular belief, Martin Luther’s reason for splitting from the Catholic Church was not one based on morality, or lack there of, within the Church.  Martin Luther, himself (as well as John Calvin) believed in the total depravity of man, which holds that the “will is so utterly vitiated and corrupted in every part as to produce nothing but evil” (Institutes, bk. II, ch. II, para. 26).  Corruption in the Church, therefore, was inevitable and had existed since the Church’s inception when Judas betrayed Christ.  It can be found in every century and was nothing new at the time of the Reformation.  Martin Luther, therefore, did not intend to create a morally pure and upright church, rather his main reason for leaving the Church was doctrinal in nature and grounded in his own scrupulosity.  While it is true that corruption was rife within the Church and that the abuse of indulgences occasioned Luther and Zwingli’s open attack of the practice, both Reformers positions quickly devolved into teaching many doctrines contrary to traditional Christian beliefs and contrary to each other.  The call for Church Reform was also nothing new at the time that Luther posted his 95 Theses in 1517.  There had been a cry for Church reform dating back to Pope Gregory VII, St Dominic, and St Francis of Assisi.  The Fifth Lateran Council (1512-1517) called for reform—Catholic reform—even before Luther challenged the sale of indulgences. Catholic figures such as Giles of Viterbo challenged the Church to repent and live according to the gospel. He criticized popes and prelates and called for the people to be transformed by study of Scripture. In Spain, the Franciscan Cardinal Francisco Jimenez de Cisneris denounced clerical corruption and stressed the importance of the Bible. Catholic reform movements transformed old religious orders and started new ones, such as the Jesuits. Great saints such as Ignatius of Loyola, Thomas More, Teresa of Avila, Francis de Sales, and Charles Borromeo reinvigorated Catholicism.

Neither was the Protestant Reformation an exercise in the rights of religious freedom.  Despite Protestant propaganda sensationalizing the Inquisitions, the fact was that the majority of the Inquisitions were never directed at Protestant Reformers (see Inquisitions).  On the other hand, secular princes and municipal magistrates made the Reformation a pretext to interfere in ecclesiastical affairs, appropriate ecclesiastical property, and to institute state religion.  Albert, Duke of Prussia, after converting monastic lands into the Duchy of Prussia, became its first ruler as well as the first ruler to establish Lutheranism as the official state religion of his lands.  After a majority of the magistracy of Zurich declared for Zwingli, they made arbitrary decrees on ecclesiastical organization and expelled any Catholic councillors from the council and forbade Catholic services in the city. The ecclesiastical organization of John Calvin was declared a fundamental law of the Republic of Geneva.  Calvin’s word became the highest authority, and he tolerated no contradiction of his views or regulations. Calvinism was introduced into Geneva and the surrounding country by violence. Catholic priests were banished, and the people oppressed and compelled to attend Calvinistic sermons. This intolerance also extended to fellow Reformers.  John Calvin attempted to have Jérôme-Hermès Bolsec executed because he argued that Calvin’s view of predestination was absurd. Calvin was unsuccessful in persuading the authorities in execution, but did manage to have Bolsec banished.  John Calvin was successful, however, in having Michael Servetus burned at the stake for denying the doctrine of the Trinity.  In England, King Henry VIII declared himself supreme judge in matters of the faith and executed any dissenters, including Thomas More and John Fisher.  After King Christian III of Denmark declared Lutheranism the state religion, monasteries, nunneries, and priories, were closed and the property taken by the crown. Vast tracts of land were handed out to the king’s supporters and royal land expanded from one-sixth of the national land to 60%. At the Diet of Copenhagen in 1546, Catholics were denied the right of inheritance and eligibility for office.  Catholic priests were forbidden to reside in the country under penalty of death.

Neither was the Reformation spurred on by the sudden “discovery” of the Bible by the lay masses due to it “finally” being translated into their own language.  The Bible had long been translated into vernacular languages, as even the Latin Vulgate itself was a vernacular translation.  Even a cursory glance through the writings of the Church Fathers and medieval theologians shows a deep appreciation of Scripture.  The idea of a “discovery” of the Bible leading to a more “pure” set of doctrines and more “clear” rule of faith is undermined by the continued fracturing of Protestant theology and its denominations, as well as the continued conversion of Protestant Biblical Scholars to Catholicism.  Sola Scriptura was not a theological conclusion following rigorous reflection, but was rather a retort made by Martin Luther following the debate at Leipzig between Martin Luther and Johann Eck in which Luther had been backed into a corner and forced to admit that he denied the authority of both the Ecumenical Councils and the Pope.

Lastly, the Reformation was not a reform, but a revolution.  Reform is intended to improve or amend what is corrupt or unsatisfactory while still maintaining that which preceded it.  The Protestant Reformation, on the other hand, sought to subvert all the fundamental institutions of the Church. By proclaiming the false doctrine of “justification by faith alone”, Reformers denied the sacraments, the Mass, and the merits of good works and rejected the institution of a hierarchical priesthood as well as the Papacy.  By proclaiming the Bible as their sole rule of faith, they rejected all ecclesiastical authority, established subjectivism in matters of faith, and utterly destroyed any resemblance of the unity that had marked the Church for the previous 1500 years. The Reformation brought theological confusion, political turmoil, and decades of war. As one man’s private interpretation would be reinterpreted by another, his interpretation would then be confounded by his successors, who would claim that he claimed too much or too little.  Thus the Anglican Church broke off from the Catholic Church. The Methodist Church broke off from the Anglican. The Holiness churches broke off from the Methodist, and those churches have seen further splits.  In claiming the Bible Alone as their sole authority (something that the Bible never claims for itself), the Reformers lost any ability to appeal to a higher court whenever there was disagreement over what exactly the Bible says.  Personal opinion became the ultimate authority of truth, which has led to endless disagreement and dissolution as well as theological decay and historical ignorance.

“the Church always needs reform.  The Church, embracing in its bosom sinners, at the same time holy and always in need of being purified, always follows the way of penance and renewal” (Lumen Gentium 8).

“On the eve of the Protestant Reformation, the Catholic Church simultaneously manifested both deep piety and corruption; the religious environment was both rich and confusing.”

“only too often the bishop was an absentee; he might, at the same time, hold more than one see; and while he held two or even more sees, he might have the additional anxiety that he has been promised a fourth when it should become vacant; absenteeism, pluralities, expectatives are the triple scourge of the episcopate.” –Popular History of the Reformation

“The spirit of mammon had won such an ascendancy in the curia that Pope Clement VII, for example, at the very height of the Reformation storm, was trying to make money from the sale of cardinals’ hats.”