The role of the Church when defining doctrine is often misunderstood by it’s critics as an arbitrary process of introducing “new” doctrine as though there is ongoing “revelation” by the Holy Spirit.  This misunderstanding leads many to make the assertion that the moment when the Church formally defines a doctrine is also the moment when the doctrine was “first introduced” in history.  The truth is that the role of the Church is to protect revealed truth as it was first given to the Apostles by Christ.  It is not possible, nor necessary, for the Church to predict every question or erroneous teaching that may arise throughout the course of history.  Rather, Christ gave the Church the ability to deal with questions on matters of the faith by giving the Church the authority to “bind and loose.”  Historically, the Church has most commonly applied this authority in reaction to heretical movements.  The Church’s response to heresy entails clarifying and further defining the original deposit of faith as it has been understood throughout history since it was first handed down by the Apostles.  This clarification is then declared doctrine in order to deter any further misunderstanding or erroneous teaching on the subject.

Non-Catholic Christians often employ the use of Scripture to define their doctrines of belief.  Scripture is certainly an important and indispensable aid in defining doctrine and doctrine should never contradict Scripture.  There are at least three criteria that are critical to show that a doctrine has a solid Biblical foundation:

Although these criteria are important in defining doctrines, they often lead to two other important questions:

The teaching that all doctrine must be explicitly described in the Bible is itself not found in the Bible.  The fact is that not all doctrines essential to Christian faith are found explicitly in the Bible.  Some doctrines can only be reasoned implicitly from Scripture and were only explicitly defined centuries after the books of the Bible were written.  Examples of this include the natures of Christ and the Trinity.  The Bible implicitly indicates that Jesus was both fully human and fully divine, but Christ’s divine nature was only formally defined centuries later at the Council of Nicaea in 325 A.D.  Here, they employed the use of the term “homoousios” to show that Christ was “the same substance” as the Father in reaction to the Arian heresy.  This definition further contains the implicit teaching of two wills, because if Christ is fully human, he must have a human will, and if he is fully divine, he must have a divine will.  Neither the Bible nor the writings of the earliest Church Fathers explicitly state that Christ has a human will distinct from his divine will, but it can be reasoned implicitly from their writings.  This doctrine of two wills, however, was only explicitly defined at the Third Council of Constantinople in 680 A.D. and was once again a reaction to a heresy, this time Monothelitism.

Because doctrines are not always explicit within Scripture, it becomes necessary to not only defend the doctrine, but also at times the development of the doctrine.  History has shown that the development of doctrine occurs in all religions, denominations, and theological traditions.  As theologians ponder their religion, they often develop a deeper understanding and thus offer more well structured explanations of their beliefs. The development of doctrine is a necessary and logical process in the life of the Church.  The growth of doctrines in their richness and complexity represents the Church’s own growth in maturity and understanding.  This growth in understanding often leads theologians to introduce new words to describe the ideas that they are trying to convey.  Examples of this include the words: “Trinity”, “Incarnation”, “Rapture”, “Hypostatic Union” (The union of Christ’s Human & Divine natures within one person), “Homoousios” (The shared essence of the Father & Son), “Christianity”, “Purgatory”, “Bible”, and “Biblical Canon”.  None of these words are found in Scripture, but Christians have used them to convey ideas.  However, as one outgrows the teachings that are found explicitly in Scripture, one must be careful not to introduce corruption into the message of the Gospel.

All Christians agree that it is essential to hold the correct doctrines (i.e. teachings) handed down by Christ and his Apostles, but disagree on what those doctrines are and which ones are essential. Nearly all denominations claim that their teachings are rooted in the Bible, yet -due to disagreements of interpretation on the meanings of certain key verses- numerous conflicting teachings exist between denominations. The past two centuries alone has seen the creation of nearly 40,000 denominations. Cardinal John Henry Newman, in his famous work “Essay on the Development of Christian Doctrine”, identified seven “notes” that would characterize authentic doctrinal developments, but would be lacking in doctrinal corruptions.  By looking at the historical origins of doctrines and testing them for these “notes”, it becomes possible to determine what are true Doctrinal Developments and what are Doctrinal Corruptions. 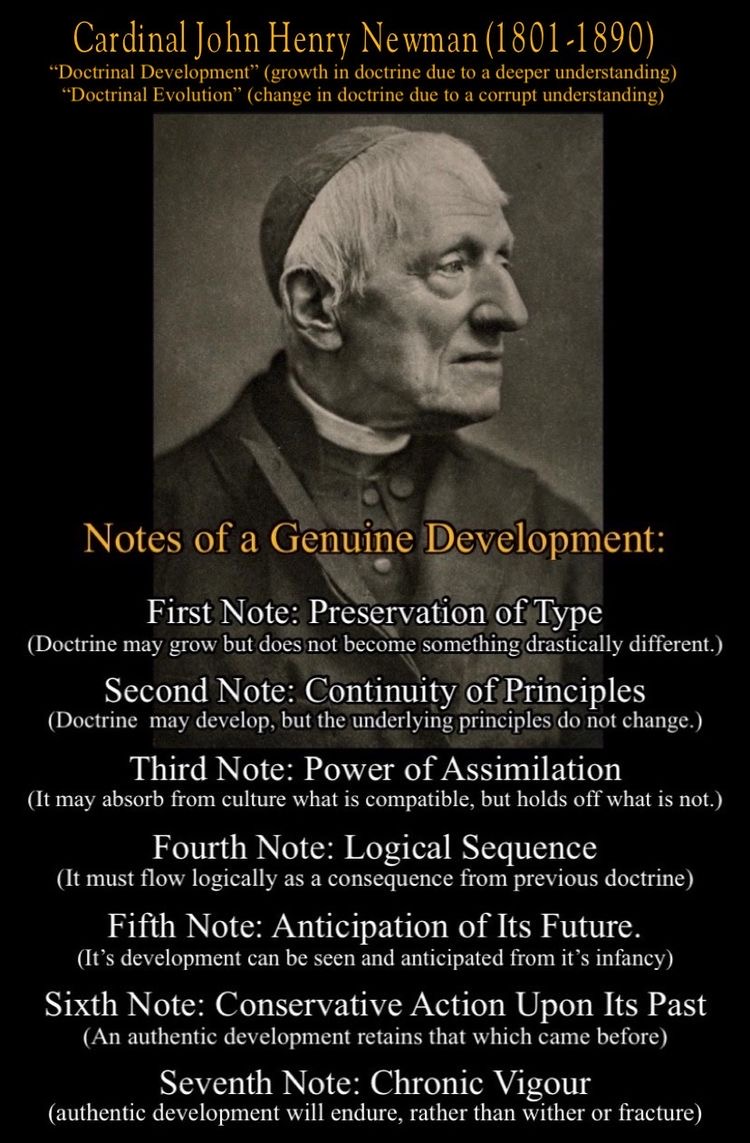 Doctrinal Development
in the Early Church: